This contagious disease is common in shelters and kennels because it is transmitted through the air. It's treatment is very similar to the one performed on humans. Therefore, the pet should be constantly hydrated, must remain sheltered, and a veterinarian may prescribe antibiotics. 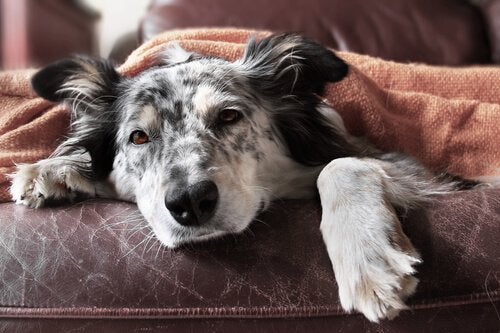 Influenza is a very common disease, both in humans and in animals. Canine influenza is very contagious, so continue reading to learn how to treat it effectively.

Influenza is a disease that is transmitted through the air and is very common during seasonal changes. It isn’t deadly, but it can become complicated and cause the human flu, which is very serious.

It is characterized by sneezing, coughing, and nasal and mouth secretions that may clog the dog’s airways. Although it is transmitted through the air, the virus may remain active on the surfaces of objects, or even on people who have had contact with infected animals.

However, this doesn’t mean that dogs and humans contract the disease from each other. In fact, each virus has similar genetics, but has very little differences that cause it to affect each species differently.

Canine influenza is common in shelters and kennels, which are often unsanitary places. The weather contributes to the spreading of this virus because the transmission of this disease is easier due to a large percentage of colds among the population.

Dog parks and other public areas also have a high percentage of contamination due to a large number of people who visit these places. Whenever you walk your dog, it’s best not to visit places where other owners take their pets.

Some breeds are more vulnerable to this disease than other due to the shape of their skulls. Brachycephalic species are usually the most affected during flu season. In any case, the symptoms of canine influenza are as follows:

Treating canine influenza is quite simple. It will need a little care, but constantly keeping a close watch on the animal is necessary. Remember, in case this disease isn’t properly treated, it can develop into another more deadly disease, such as pneumonia and even distemper.

Therefore, it’s best to take your dog to the vet in order to rule out diseases with similar symptoms. Once the most serious options are ruled out, and the vet has verified that the disease is only the flu, it’s time to begin the treatment.

Remember that the physiology of humans is very different from animals, so you shouldn’t even think of giving your dog antibiotics or flu medication.

Once your vet prescribes the antibiotic for your pet, it’s best to follow the instructions your veterinarian gives. A mistake in dosage can be deadly.

Likewise, remember to give your pet enough fluids to keep him hydrated and strong. This disease causes the body to dry up and leaves it without mucus, which irritates the skin.

Keep your pet warm. Your dog’s body temperature will extremely drop because of the fever. Giving him a blanket to cover him is a good idea. He’ll appreciate it.

How to prevent canine influenza

Just as it is for humans, there is a cure for this disease. Nevertheless, it can be prevented by following some simple steps.

For example, a balanced diet will cause your pet to have strong defenses. That way he can cope with the virus on his own and won’t get completely sick. Likewise, constant exercise is a good way to strengthen his defenses.

Try to clean the surfaces your dog has contact with to eliminate bacteria and maintain a clean environment for him to live in. Don’t allow him to be close to any breezes. The disease is mostly transmitted through the air, so you wouldn’t want him to catch a cold by accident, wouldn’t you?

Also, try to use alternate routes around parks and shopping centers. Try beaches and even the countryside if available. Your pet will enjoy those places to the max, and you will definitely notice it. Plus, you can play games there that wouldn’t be possible in other places.