Escherichia Coli: The Bacteria of Mammals

Escherichia coli is a bacteria that lives naturally inside humans. Since there are some pathogenic strains that produce intestinal illnesses, it's important to know how to keep it from spreading to us or our pets. 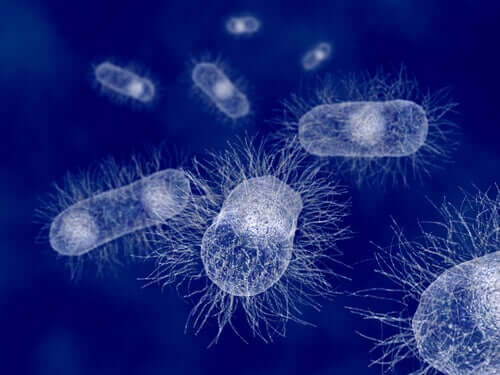 Without a doubt, you’ve heard of Escherichia coli (E. coli). Perhaps you yourself have suffered from the discomfort it produces, or maybe you know someone who has. But did you know that farm animals are carriers (reservoirs) of this bacteria?

E. coli is considered the most studied free-living bacteria. Most of the strains in existence inhabit the colons of mammals and birds. They don’t cause illnesses in these animals, but rather they help them carry out digestive processes. However, outside of the gastrointestinal tract, they cause infections in tissues and organs that are vulnerable to the toxins of pathogenic strains.

Below, we’ll tell you more about this interesting pathogenic agent that can affect both human beings and animals.

There are multiple serotypes that can cause these intestinal disorders. One of the most studied pathogenic strains to date is Escherichia coli, a product of the toxin Shiga toxin, or STEC. This type of bacteria experiences optimal growth in temperatures between 45ºF and 122ºF.

Among the STEC strain is the serotype O157:H7, which was associated with the major hemorrhagic colitis (bloody diarrhea) and hemolytic uremic syndrome (HUS) outbreaks that took place in the United States and Canada in 1983.

In human beings, an E. coli infection causes abdominal pain and diarrhea followed by fever, vomiting, and other aches and pains.

STECS inhabit the intestinal tract and are excreted through the waste of a wide variety of animal species. These include farm animals (livestock like sheep, goats, and swine), as well as other mammals (cats and dogs) and birds (chickens and turkeys). Cows are the most important reservoir of zoonotic STEC.

Means of transmission and the source of infection

Since we’re talking about a microorganism that’s found in the digestive tract, it spreads through water and foods contaminated by fecal waste. Most of these pathogenic strains are responsible for the symptoms of colitis. They can also cause more serious disorders like hemolytic uremic syndrome (HUS), which occurs when the toxin enters the bloodstream.

In livestock, the main source of infection is drinking water, food, and also an animal’s environment. Therefore, wild animals and companion animals that live in the same area as livestock can also be carriers.

In human beings, the spread of E-coli takes place through the oral-fecal route. Some cases have involved pets spreading the bacteria to their owners through their excrement. Ingesting fruits and vegetables is another possible means of contagion. This is because, at some point during their growth or harvest, they may have come into contact with the feces of animals that carry the strain.

Given all of these facts, eating meat and dairy products that are raw or undercooked poses a health risk to humans and increases the chances of contagion. The same is true when it comes to handling contaminated foods and the kitchen utensils and surfaces used in their preparation.

The treatment of Escherichia coli infection

The fact is, there’s no antibiotic treatment for the elimination of the E-coli bacteria. The best course of action is to incorporate enough liquid in an individual’s diet in order to prevent dehydration.

Those individuals who develop hemolytic uremic syndrome will require hospitalization. They will need to remain under observation in order to control the loss of electrolytes and liquids. This is because the condition causes the kidneys to lose proper their function.

The correct control of STEC in livestock should focus mainly on the source of contamination. In other words, the animal reservoir. This means taking the proper measures in order to reduce intestinal colonization of these bacteria among livestock:

As for humans, preventative measures focus on good hygiene and applying the food safety recommendations established by the World Health Organization (WHO).

As we’ve mentioned, E. coli is a bacteria that causes serious illnesses, like hemorrhagic colitis and hemolytic uremic syndrome. However, we can’t forget that most of these types of microorganisms are part of our bodies as well as those of animals. In other words, they assist in a great number of processes, such as the absorption of nutrients in the intestines.

In order to avoid the spread of the pathogenic strains, we should practice good hygiene and handle and cook our food correctly.

Porcine Respiratory Disease Complex in Pigs
And one of the illnesses that pigs may suffer from is porcine respiratory disease complex. Find out all about it in this article. Read more »
Link copied!
Interesting Articles
Illnesses and Treatment
6 Genetic Diseases in Cats