It's difficult to diagnose due to its main symptom diarrhea not being exclusive to this disease and can only be detected in fresh stool samples by using a microscope. It can cause irreversible damage to the small intestine and other organs. 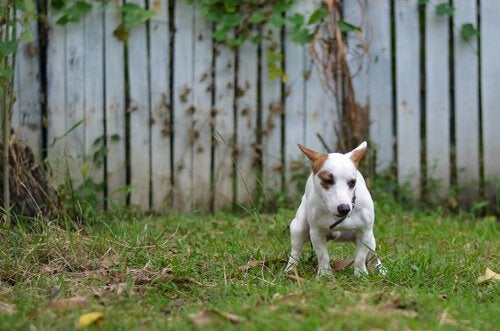 Giardiasis in dogs is a disease that frequently affects pets. The cause of this pathology is a cell called giardia, which fixes itself to the intestinal villi and prevents food absorption, and produces an infection in the small intestine.

Giardia usually lodges itself on the duodenum, where it reproduces and feeds until the small intestine begins to dehydrate. Before being eliminated, it forms a cyst that the animals pass through their feces, which afterward transmit the disease to other animals.

When another animal ingests a cyst, it opens once it reaches the intestine, and begins the reproduction cycle once again. Giardia reproduces by dividing just like bacteria.

After a short time, millions of parasites can appear from a single cyst. You can only see the cysts in fresh fecal specimens by using a microscope.

Giardiasis in dogs is an infection that isn’t usually detected in time due to the asymptomatic nature of its early stages. However, during advanced stages of this parasite, the main clinical symptom is diarrhea, and weight loss in chronic cases.

Ingesting one or more cysts can cause the disease. What are the signs of this pathology? Due to fact that they are eliminated in cycles, you have to examine many fecal samples to detect symptoms.

All of this means that a sample of fecal matter may or may not contain the cell. Likewise, the analysis can be negative one day and positive the next.

Giardiasis is spread by direct dog-to-dog contact, including through food and water. On several occasions, its pathogenic action is reinforced when bacteria, fungi, and viruses appear. These make the clinical symptoms worse, and the disease more severe.

This condition can also cause permanent damage to the intestine and internal organs. Similarly, you can also detect adverse effects such as anorexia, vomiting, and other neurological disorders in dogs who received prolonged treatment.

What to do once giardiasis has set in

Once you have detected the disease, you must quickly take action to eliminate it and keep it from spreading. One of the first things you should do is to bathe your pet. Above all, clean his tail thoroughly, because cysts normally lodge themselves on this location.

Clean every surface that the animal normally stays at with an effective product once a week until you have completely eliminated the disease. Also, sanitize his food and water containers, and cages, because these objects that carry a lot of fecal matter.

If the dog isn’t the only pet in the house, you must treat all the animals that live together. Also, you have to repetitively run veterinarian exams one week and one month after detecting the infection.

The dog can be an infection source not only for other animals, but also for the humans who live with him. Therefore, it’s important to take preventative measures into consideration in order to prevent the dog from contracting the disease and spreading it to the other household members.

Due to being a zoonosis, it’s important to take preventative measures, such as regular hygiene, to ensure that other household inhabitants don’t get infected. This is important especially when dogs live with young children. Infection and subsequent medication can pose some harmful risks for their bodies.

You should also be careful not to allow the dog to drink dirty water, or water from fountains. A good way to control this is by placing its drinking trough where birds cannot defecate in it.

Anti-parasitic methods are good allies for preventing these kinds of infections. There are many options on the market–from blister packs to collars. On the one hand, they don’t cause side effects. On the other hand, they also help eliminate parasites and keep them from reappearing.