How to Know if a Bird is Sick

At some point in their lives, your pet birds will probably get a disease or be affected by parasites. Here's how to know if a bird is sick. 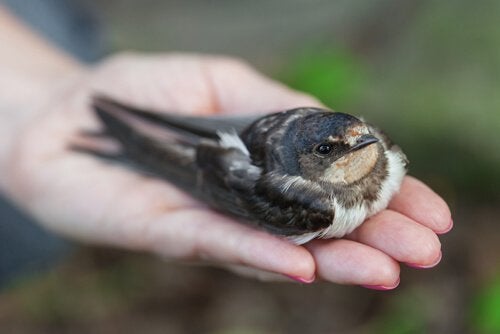 At some point in their lives, your pet birds will probably get a disease or be affected by parasites. In those cases, it’s essential to recognize the first symptoms so you can diagnose the problem early on. To help you, we’ll show you how to know if your bird is sick.

When you adopt a bird as a pet, it’s important to understand that they are sensitive animals. They need adequate preventative medicine to keep them in good health.

The most worrisome diseases in pet birds

Before we explain the main signs that a bird is sick, we should take a look at the most worrisome diseases in pet birds. That way, it’ll be easier to recognize their symptoms and provide proper care to prevent them.

This is a highly contagious disease among birds caused by the bacterium Pasteurella multocida. It spreads rapidly and multiplies quickly in the body, especially among hens and other poultry.

The first symptoms of fowl cholera are usually lack of thirst and appetite. In other words, the bird stops drinking water and no longer shows interest in its food.

Avian influenza or bird flu is a severe, highly contagious viral pathology caused by a virus belonging to the Orthomyxoviridae family. It is one of the most dangerous diseases to affect birds, with a mortality rate of almost 100%.

To find out if a bird is sick with avian influenza, watch out for the following symptoms:

This is one of the most common and worrisome diseases in birds kept in captivity. It is caused by a herpes virus. It spreads rapidly and can lead to the formation of multiple tumors in vital reproductive organs (lungs, liver, ovaries, etc. )

Because of its possible complications and consequences, it’s important to diagnose this disease early on and establish appropriate treatment to stop it.

In general, Marek’s disease is silent–it progresses without showing visible signs. In a more advanced state, progressive paralysis of the wings and legs is the most characteristic symptom of this disease.

6 common signs to know if your bird is sick

As you can see, each disease has its own symptoms. These can vary according to each bird’s individual body. In short, here are some common signs that usually indicate that a bird is sick:

As you can see, many diseases progress quietly, and compromise your bird’s health without showing visible signs. Therefore, it’s important to invest in preventative methods in order to take good care of your pet birds.

Don’t forget to take your bird to the veterinary specialist every six months for preventative check-ups, required vaccines, and deworming treatments.

The Helmeted Curassow: Bird in Danger of Extinction
This is an article about the intriguing helmeted curassow, a bird found only in Venezuela and Columbia. Sadly, it's in danger of extinction. Read more »