Important Information About the Use of Corticoids in Dogs

In today's artice, we'll take a look at the therapeutic use of corticoids in dogs as well as the controversy that surrounds them. 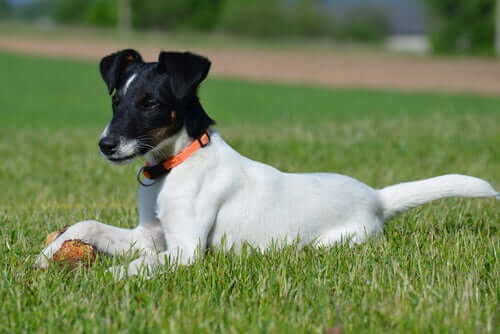 The use of corticoids in dogs is recommended in a variety of chronic illnesses and certain metabolic deficiencies. However, their healing effectiveness is the object of many controversies, given the secondary effects they have on a dog’s body.

Below, we’ll take a closer look at corticoid medications, their risks, and of course, the benefits they offer man’s best friend.

Corticoids belong to the steroid hormone group. The bodies of humans and dogs release moderate amounts of certain corticoids naturally… such as cortisol (hydrocortisone) and corticosterone. The production of these hormones occurs in the cortex of the suprarenal glands, which explains their names.

The organic function of corticoids is related to the control of stressful and anxiety-producing situations. In these cases, the body secretes small doses into the bloodstream to create a quick response.

However, the pharmacological use of corticoids has more to do with their potent anti-inflammatory effect. Corticoids impede the accumulation of inflammatory cells in affected areas and thus reverse symptoms.

The use of corticoids in dogs: What illnesses are they useful for?

Veterinarians may prescribe oral corticoids, topical applications (creams and ointments), inhalers, and injections. It’s up to each doctor to determine the correct form of application, depending on the illness in need of treatment.

The purpose of their administration is to contain inflammatory processes and relieve acute symptoms that result from the following conditions:

Why is the use of corticoids in dogs so controversial?

The main reason that the use of corticoids in dogs is controversial is that they don’t treat the true cause of inflammation. In other words, their effect is palliative, meaning they only relieve symptoms temporarily.

Since they establish criteria for their action, they inhibit the immunological function of lymphocytes and macrophages in the swollen areas. Therefore, they tend to have immunosuppressive effects that hurt the organism and can leave animals vulnerable to other problems.

In fact, the use of corticoids can produce an effect that’s just the opposite of the desired effect. They can even impede the dilation of blood vessels and the release of enzymes… both of which are crucial when it comes to mediating the swelling naturally.

Mild side effects of the use of corticoids in dogs

In moderate doses for short-term treatments, corticoids can produce the following side effects:

Chronic side effects of the use of corticoids in dogs

When it comes to the prolonged use of corticoids in dogs, there are also serious side effects. The damage can be chronic, meaning they affect animals for the rest of their lives and may require permanent treatment.

Corticoids reduce the production and release of gastric mucus, thus eliminating the main protective layer on the stomach walls. At the same time, they increase the secretion of chlorhydric acid, which favors the appearance of gastritis and ulcers.

Many pets have developed problems when it comes to the fixing of calcium. This issue makes their bones more vulnerable to degenerative diseases such as dysplasia and arthrosis. These animals have also demonstrated a greater propensity towards fractures and trauma due to the wear on their bone mass.

What’s more, different metabolic alterations have been observed in animals that have received high doses of corticoids. This includes an imbalance in their vitamin and mineral levels as well as in hormone production.

Corticoids also interfere in the metabolism of the carbohydrates that a dog ingests as part of its daily diet. As a consequence, dogs can suffer from hyperglycemia and develop diabetes.

Other side effects of treatment with corticoids

Corticoid use in dogs with gastritis or ulcers, diabetes, cardiac illness, and infections is not safe. This is because the immunosuppressive effects can quickly cause the animal to pass away.

8 Common Diseases in Dogs
Prevention and information are the best tools we have to help take care of our pets. If we know the symptoms and quickly take them to the vet, there are much higher chances that they will heal and improve. In this article, we are going to talk about the most common diseases in dogs. Read more »