Leptospirosis in Cats: Symptoms and Treatment

Leptospirosis in cats is an example of a bacterial infection which affects more than 150 species of domestic and wild mammals around the world. 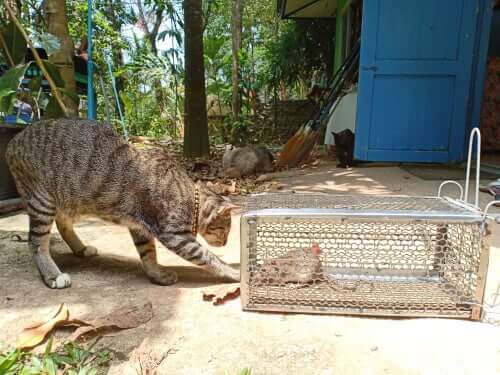 Leptospirosis in cats is a zoonotic disease caused by bacteria. It’s currently considered an emerging infectious disease in both humans and dogs.

However, there are several wild and domestic animals (such as cats) who may not suffer from the symptoms of the disease even if they’re infected. This is known as subclinical infection.

These particular species carry the disease, acting as reservoirs of bacteria, and can be a potential source of infection for other animals and humans.

What to know about the causative agent: Leptospira

Zoonotic diseases are diseases that can be transmitted between different species of mammals. This means that they can spread between humans and other kinds of animals.

To date, there are a total of 22 different identified species of Leptospira. Of these, 13 can cause illness in humans.

Species of Leptospira are also classified according to the agglutination reaction by sera that possess antibodies that recognize the bacteria. These classifications are called serotypes. So far, studies have identified about 300 pathogenic serotypes of Leptospira.

This bacteria has a very particular appearance and looks like thin spirals. One or both ends of the organism normally have a hook shape.

This bacteria enters the body through physical contact, penetrating the skin and mucous membranes by producing an enzyme that changes the permeability of the connective tissue. To be more specific, it digests the hyaluronic acid to allow it to invade the tissue.

Leptospirosis in cats: how do the bacteria spread?

The bacteria are present in the urine of infected animals. This infected urine can then contaminate surface waters such as wetlands, streams, and rivers. Then, here, the bacteria can survive for long periods, even up to several months. As a result, the transmission of the disease is often via water.

Cats can become infected either directly or indirectly. An example of an indirect infection would be when a cat eats a wild animal that has drunk infected water.

On the other hand, direct infection can occur through contact with infected urine from other infected animals in the same environment. It can also happen as a result of drinking infected water that contains the Leptospira spirochete.

Once they’ve penetrated the mucous membranes or skin, leptospira rapidly multiply in the blood. It can invade many different organs, particularly the kidneys, where leptospires can linger and spread through the animal’s urine for months or even years.

Signs and symptoms of leptospirosis in cats

When analyzing cats that suffer from the infection, tests have found the bacteria to be present in urine and blood. These studies have established that leptospirosis in cats only causes mild clinical symptoms.

Despite the fact that clinical signs rarely appear in cats, leptospirosis in cats does cause inflammation of the kidneys and liver. In fact, recent studies have shown a potential link between feline chronic kidney disease and Leptospira spp.

Just like with dogs, treating sick cats depends on how severe their symptoms are. However, generally, treating leptospirosis in cats involves antibiotics and supportive therapy.

In the cases where apparently healthy cats have leptospira in their urine, doxycycline treatment should be prescribed (11 mg/lb every 12 hours for three weeks) to get rid of their carrier status.

Firstly, consult your vet to rule out leptospirosis in cats. Remember, even if your cat doesn’t show any symptoms, they can still be a source of infection for dogs and humans.

We can’t imagine life without our cats. However, the fact is that cats can be a reservoir of Leptospira in the home. As a result, screening for leptospirosis in cats is something we highly recommend.

To do this, there are special tests available that can identify bacteria in the blood, urine, or other tissues. You can also carry out tests to detect the presence of antibodies in the cat’s blood to fight against the bacteria.

Rodents: Would You Keep a Rat as a Pet?
Keeping a rat as a pet might put people off coming to your house, but trust us when we say it's not as bad an idea as it might seem. Read more »
Link copied!
Interesting Articles
Illnesses and Treatment
Mycotoxins and Animal Production