Lice infestation in domestic birds is one of pet keepers' biggest concern. But with proper hygiene and preventive medicine, it's possible to keep them from appearing and/or spreading around. 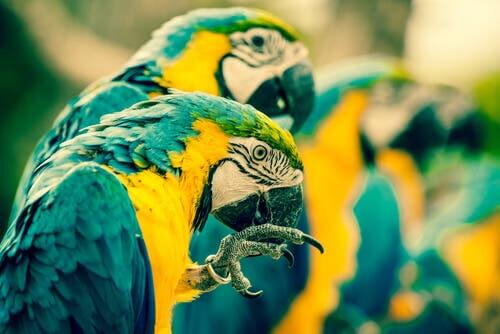 What are the main types of lice infestation in domestic birds? Well, lice are wingless insects that act as ectoparasites, affecting almost all species of birds and mammals. Thanks to their ease of reproduction and high contagion, they can be considered pests. In fact, they cause various zoonoses.

Science already recognizes and catalogs more than 40 species of lice in birds. They all belong to the same family: the Mallophaga. Also, most are considered cosmopolitan. That is, they’ve spread across the planet.

These parasites can affect domestic and wild birds of all sizes and ages. Also, infested birds often harbor more than one species of louse on their bodies.

The six most frequent species of lice infestation in birds

This species measures about 1/8th of an inch and mainly infests the area of ​​the head and neck of birds. It mainly affects young birds and turkeys.

Contrary to popular belief, this kind of louse doesn’t suck a bird’s blood. In reality, they feed on the small residues of its skin and plumage. For this reason, the parasites prefer to hang out at the base of the feathers.

The infestation must be treated quickly to avoid severe damage to an animal’s health.

This species is the one that most commonly affects various species of domestic birds. It’s usually very harmful to an animal’s health, mainly during its first months of life.

The size of this parasite is between 5/64 and 1/8 inches. It’s one of the most robust species and can feed on either the bird’s blood or on skin and feather residue.

This bloodsucker is similar to fleas. It tends to hang out areas with the lowest concentration of feathers, such as around the cloaca. But as the infestation progresses, they can infest the bird’s entire body, causing serious injury.

This medium-sized species (between 1/16 and 5/64 inches) has a body with various shades of gray. It predominantly infests a bird’s wings, but it also hangs out in their head and tail.

This parasite is popularly called “plucking louse,” as it voraciously feeds on pieces of feathers. An affected bird quickly loses plumage and has wounds on its wings.

These lice infest pigeons more frequently, but can also affect other domestic bird species. Its average size is 1/16 to 5/64 of an inch, and its food consists of dead cells from the skin and feathers.

This parasite usually prefers to hang out in the interior part of a bird’s wings, where it also lays eggs.

This species is small and doesn’t usually exceed 1/16 inch in length. However, it can cause serious damage to the plumage and health of both domestic and wild birds.

It frequently feeds on dead cells from the skin but can suck blood from the resulting wounds. The parasite usually hangs out in the chest, torso, and shoulders of a bird.

These ectoparasites often cause severe itching and their infestation leads to constant scratching in a bird. Another common symptom with the advance of this infestation is the loss of vitality, leading to a lethargic depressive state.

There are specific products for the prevention of red lice and mites in parrots and other domestic birds. The best mode of prevention is to spray these products periodically on a bird’s body, in addition, you must properly disinfect the cage, accessories, and even your entire home.

Lice infestation in birds – the risk of developing scabies

A mite and lice infestation can lead to the development of skin allergies and scabies in birds.

Scabies is a highly contagious disease that needs to be treated quickly to preserve the health of your birds. So, you must consult your vet immediately if you recognize any of the above symptoms.

Also, note that the main symptom is the formation of white crusts or warts on their eyes, nostrils, and legs.

Treatment generally consists of applying sulfur-based ointments. Thus, the goal here is to reduce inflammation and promote the regeneration of epithelial cells.

Finally, the best prevention against lice in domestic birds is to take proper care of their home and personal hygiene. This includes respecting the periodic deworming and vaccination of every species.