Did you know dogs can also have obsessive compulsive disorders? Today's article will tell you all about it. 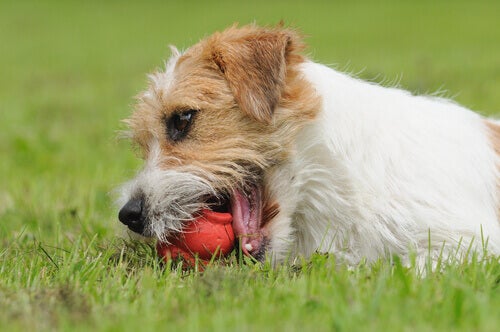 Obsessive compulsive disorder (OCD) is a pathology derived from anxiety and characterized by intrusive, recurrent, and persistent thoughts that produce fear and apprehension. There are many types of OCD in human beings who are generally focused on the repetition of activities and patterns (compulsive de-clutterers and hoarders are among them).

It may seem incredible, but dogs can also suffer from this type of behavioral pathology. Today’s article will describe how to identify the symptoms and what the possible remedies for it are.

How to diagnose an obsessive compulsive dog

Since animals can’t speak or perform excessively complex functions, one can identify this disorder in them by watching for repetitive behavior such as:

Obsessive compulsive disorder is closely linked to the concept of stereotypy. This is a behavior pattern that animals repeat over and over again for no apparent reason. Stereotypies aren’t always indicative of OCD, as they can occur under situations of stress or lack of attention. Usually, they disappear as soon as the stressors disappear.

However, in the case of this disorder, the stereotypies usually appear early in a dog’s life. They don’t just linger, but, rather, intensify over time. In general, these behavior patterns can become self-destructive and lead to all sorts of damage to the animal itself such as:

Keep in mind that dogs won’t purposely harm themselves due to their keen survival instincts. However, you must consult a vet immediately if you observe any of the above signs. This is because either one of them is a clear indication that something’s wrong with the animal.

Dogs with a painful medical condition, those predisposed to anxiety, and those with a disease that modifies any of their senses are more prone to obsessive-compulsive disorders. Thus, there’s a clear physiological component to this disorder.

Also, it’s clear that previous experiences and factors external to the animal’s own body are also decisive. A history of repeated violence over a long period of time, neglect, confinement, and many other factors linked to abuse are all factors that are closely related to this type of disorder in dogs.

In fact, these types of pathologies, as well as stereotypies, are common in pets rescued from abusive environments.

This is why you must be aware of the complications this condition can bring to your normal life, both for you and your pet, before adopting a dog with a complex life history. Giving a second chance to abused dogs is a wonderful thing as they really need a loving environment.

However, the people who adopt them must have some experience in canine education as well as the time and patience to deal with obsessive compulsive disorder.

The help of professionals in the field of canine ethology and psychology is essential in order to address a disorder as broad as OCD. It requires prolonged behavior modification sessions. Keep in mind that modifying an animal’s behavior is a slow process that requires patience.

Prescribed medication might also be necessary, depending on the severity of the behavior or trauma. Unfortunately, you may have to administer it for life. There are anxiolytics and antidepressants specific to dogs.

Obsessive compulsive disorder is a pathology that’s difficult to identify and address but you should be able to tackle it with patience, understanding, and professional help. Every animal deserves a life full of happiness.