Is your dog getting old? How can you improve its quality of life? One potential problem you should know about is Cognitive Dysfunction Syndrome. Educate yourself and read more below. 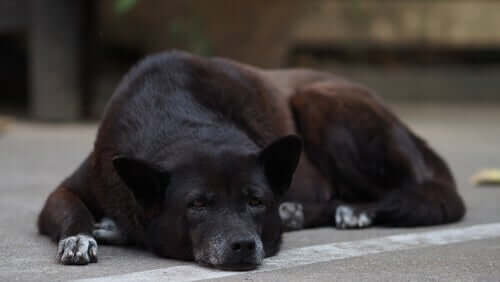 They say that there’s nothing sadder than getting old. And, unfortunately, everything gets old: you, your things and your pets as well. Watching a beloved pet getting old and unsteady isn’t pleasant. One of the possible problems older dogs may have to face is the Cognitive Dysfunction Syndrome.

Learn about this syndrome that occurs in older dogs. It’s always good to be well-informed about problems your pet might face. That way, you’ll be able to help your friend have the best quality of life possible.

What is Cognitive Dysfunction Syndrome?

This disease is more common in older dogs, but can even occur in middle-aged dogs. According to different studies, it seems to be caused by changes in the nervous system due to the aging of the cells that happens with the passing of time.

The canine nervous system is extremely sensitive to free radicals. These make neurons that carry out important functions age more rapidly and even die. Therefore, the brain can’t create new neurons to take the place of the damaged ones. This all means that the aging process speeds up.

Due to these changes in the brain and because of a decrease in neurons, the animal starts to change its behavior. This affects the dog’s quality of life. The changes also affect the dog’s capacity to interact with other dogs and even with its owners.

How can you know if your dog is suffering from Cognitive Dysfunction Syndrome? It’s important to get to know the symptoms. Some common symptoms are:

Other symptoms could include:

Although this is a degenerative disease and there isn’t much you can do to cure it, you will be able to improve the symptoms with some treatments or medications. Certain treatments could help your dog to have a better quality of life if it suffers from Cognitive Dysfunction Syndrome.

Apart from the above drugs, you could also alternate with natural products that can combat the effects of free radicals. Some of these are:

Of course, even though these natural components may help your pet, you should still take it to see the vet.

Dogs with Alzheimer’s: What Are the Symptoms?
Experts say one out of every two dogs over the age of 15 would have Alzheimer's disease. This disorder causes elderly dogs to get lost easily. Read more »
Link copied!
Interesting Articles
Illnesses and Treatment
Four Common Health Problems in Small Dog Breeds