Parasites in Pets that Can Cause Illness

Parasites not only affect dogs and cats, but they can also spread illnesses to human beings. Today, we'll tell you all you need to know about parasites in pets. 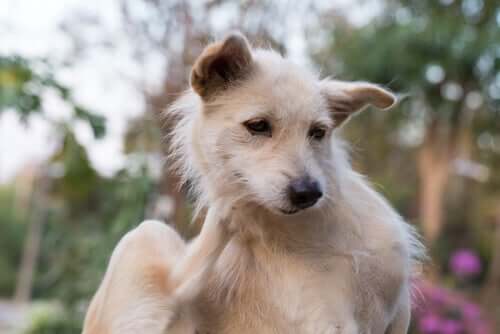 Parasites in pets can be either internal or external. They not only affect dogs and cats, but they can also spread illnesses to human beings. In the following article, we’ll tell you all you need to know about these organisms that dwell in and on our pets.

Parasites in pets: Internal and external

Parasites are organisms that live at the expense of other beings, feeding off them without killing them. The problem occurs when the parasite population is so high that it starts to affect the health of its host.

We often don’t realize that our pet may have a parasite infestation, since some types live in the intestines or lungs. Other types are easier to detect because they live on the skin of animals, such as fleas and ticks.

There are a number of symptoms that indicate that an animal may have parasites. These include:

What are the types of internal parasites in pets?

Some of these parasites can affect both cats and dogs, and some can spread to human beings as well. Below are a few types of internal parasites:

Toxocara canis, or dog roundworm, is an intestinal parasite that can spread to human beings as well. In dogs, it causes diarrhea and respiratory problems. In puppies, it causes coughing, swelling of the abdomen and increased mucus production.

Ancylostoma caninum–also known as hookworm–is a parasite that only affects dogs. Its symptoms include diarrhea with blood, anemia and overall weakness. Another similar organism, Trichurus Vulpis (a type of whipworm) causes weight loss as well.

While it’s more common in dogs, dipylidium caninum can affect cats as well. It’s one of the most common parasites in pets, and is also known as flea tapeworm, double-pored tapeworm, and cucumber tapeworm. It can become very large and has a ribbon or tape shape.

At first, this parasite does not produce symptoms. However, it later causes diarrhea or constipation, weakness, swelling of the abdomen and even delayed growth in the case of puppies.

This organism affects cats and dogs alike. The symptoms are mild, mainly consisting of diarrhea. Coccidia is common in young pets that have suffered overcrowded conditions.

Giardia spp spreads through contaminated water and affects both cats and dogs. It produces diarrhea, although in many cases, it doesn’t give any symptoms at all.

This parasite is more common in dogs and spreads through mosquito bites. It’s more commonly known as heartworm because the larvae go to this organ and then turn into worms.

The small thread-like worms cause dirofilariasis, an infection that causes weakness, lack of appetite, respiratory problems, and even death. The areas of the United States with the highest rate of infection are within 150 miles of the coast running from Texas to New Jersey. Rates are also high along the Mississippi River and its tributaries.

Mosquito bites are also responsible for the spread of this parasite. To date, Leishmaniasis is an illness that doesn’t have a cure. The symptoms are varied, including ulcerations, scaling of the skin, weight loss, vomiting, and skin lesions.

Early treatment is fundamental in preventing death in dogs.

What types of external parasites in pets are there?

Besides the parasites mentioned above, which affect the internal organs of dogs and cats, external parasites also exist:

These parasites affect dogs and cats alike. They latch onto the animal’s skin, are round, and brown in color. They feed on the blood of their hosts and can transmit disease.

Fleas are more common in dogs and produce allergic dermatitis, irritation, and itchiness. Furthermore, it can cause pets to lose their fur due to excessive scratching. Many people also suffer from flea bites.

These mites mainly affect canines. In this case, the parasites hide among the skin and fur, mainly behind the ears, elbows, and hocks. The mites produce alopecia (baldness), pus-filled wound scabs, itchiness, burning, and irritation.

These parasites in pets inhabit the hair follicles of animals and cause demodectic mange. They cause reddening, scaling, and baldness especially around the eyes, and bone protrusion (the spine, for example)

The prevention of illness-causing parasites in pets

There are different anti-parasitic medications that veterinarians can apply to pets through vaccines. These vaccines serve as preventative treatments in the case of internal parasites. As for external parasites, the options vary. They include collars, pipettes, shampoos, lotions, and even pills. Preventing our pets from getting sick as a result of these organisms is fundamental.

Tea Tree Oil as a Treatment Against Parasites
Tea tree oil is great treatment against parasites. This oil is obtained through the method of steam distillation of the leaves of Melaleuca alternifolia. Read more »
Link copied!
Interesting Articles
Illnesses and Treatment
Characteristics of Displaced Abomasum in Cows