Pyometra in Dogs: Symptoms and Treatment

Female dogs of reproductive age suffer from this condition, which can be fatal, hence the need to remedy it urgently. Surgery can be more or less invasive, to the extent of rendering the dog sterile. 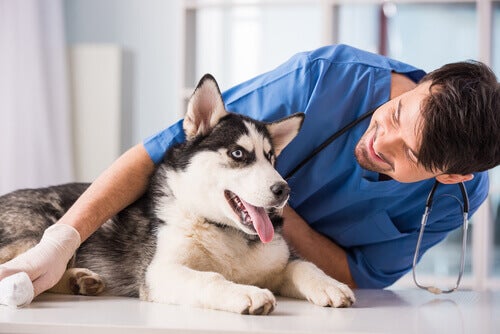 Pyometra in dogs is a disease affecting females that have reached sexual maturity. This is a uterine infection that must be treated as soon as possible, as it can lead to septicemia, peritonitis, and renal insufficiency.

Canine pyometra and its causes

Cystic endometrial hyperplasia, also called pyometra, is a hormonal disease caused by an abnormal increase of progesterone. Pyometra can affect the female dog’s fertility, and even cause serious organ failure that can be fatal. Unfortunately, a large number of dogs of reproductive age suffer from this disease at some point in their lives.

The hormonal cycle of the female is directly related to the appearance of the disease. This is because it usually occurs 10 or 12 weeks after ovulation. This is mainly due to a natural increase in progesterone that reduces uterine contractions and causes a series of changes in the endometrium.

Pyometra in dogs is sometimes related to hormonal treatments. High levels of progesterone cause a bacterial response that leads to the infection of the endometrium. Therefore, if you’re administering hormones to your female dog, keep in mind that the risks of her developing this disease are very high.

Symptoms and diagnosis of pyometra in dogs

In 85% of cases, canine pyometra presents vaginal secretions with the presence of pus or blood between the second and eighth week of the estrus.

According to the local symptoms of the animal, we can distinguish between two types of pyometra:

The most common clinical signs in both cases are despondency, dilated abdomen and anorexia, in addition to vaginal secretions, and abundant thirst. However, the mere presence of the secretions is usually sufficient to diagnose pyometra.

Additionally, the vet can perform further tests to confirm the diagnosis:

Treatment and prevention of pyometra

The most common treatment for pyometra is usually surgery. Thus, the most aggressive, but also the most effective procedure is the ovariohysterectomy, in other words, the removal of both uterus and ovaries. This highly invasive procedure indicates the end of the dog’s reproductive life, but completely eliminates the chances of developing the disease.

Other less invasive treatments include washing the uterus or applying a transcervical drainage. Furthermore, the administration of antibiotics and prostaglandins can also help eliminate the infection. However, this non-surgical approach is only effective for less severe infections.

In terms of prevention, sterilization appears to be the safest and most effective method. This is due to the fact that the reproductive life of the female dog determines the hormonal cycle, and with sterilization, the production of progesterone ceases completely.

In conclusion, we must take into account that a sexually mature and active animal is more likely to get infected. Therefore, you should consider sterilization in order to keep your animal safe.

Dogs: The Keys to Successful Breeding
Many dog lovers see breeding their pets as a great opportunity to make a bit of extra money. Today, we'll give you some tips to ensure successful breeding. Read more »
Link copied!
Interesting Articles
Illnesses and Treatment
What Causes Brachycephaly in Dogs?