Scabs on Cats: Symptoms and Treatment

Several reasons can cause scabs on cats, but all of them must be treated in time to prevent the problem from escalating any further. 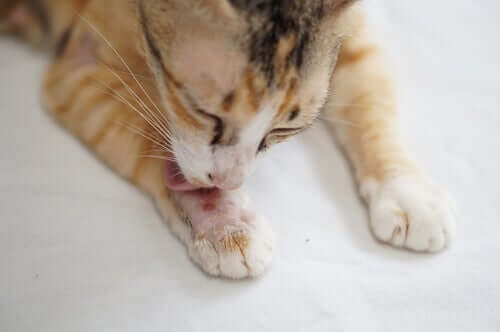 Knowing for sure that your cat doesn’t suffer from any ailment is much more complicated than with other species. This is so because they know how to camouflage their emotions very well and almost never complain unless they’re really bothered by something. Scabs on cats are one of those things that you usually notice late if you don’t examine your pet regularly.

As they are wounds that appear on the skin, they go unnoticed under the fur at first, and even more so in long-haired cats. Only by touching them can we tell that something is wrong and can take appropriate action. However, the reasons why scabs appear on your cat’s skin can vary greatly.

Among the most common causes for this type of ailment are:

Scabs are just a consequence of other factors. Most commonly, situations that have led to the cat itself hurting its skin when trying to remedy the discomfort. This extreme situation is achieved through the following actions:

Scabs on the head and neck

Scabs around the head and neck are common in cats. However, many people mistakenly believe that they come from rough play with other cats. This isn’t usually the case. The most likely cause is some type of allergy, the most common being flea allergy, food allergy, or allergy to something inhaled in the environment.

Just as the reasons why scabs appear on cats are so diverse, so is the treatment. It’ll be necessary to carry out several of them to solve the issue. Of course, the first step is to take the cat to the vet for an exhaustive check-up and to diagnose the reason for the scab’s appearance.

Once the cause is identified, it’s crucial to start treatment as soon as possible. For instance, if the reason for the scabs appearing is fleas, everything will be solved with anti-parasites. If it comes from an infection, the corresponding medication will be given. In the case of a tumor, other measures would be taken, such as its removal or extirpation.

In any case, as usually happens with cats and other reserved animals, it’s best to be attentive to their behavior. Checking different areas of their body from time to time to verify that everything is going as it should is also recommended. In this way, both you and your beloved pet will enjoy a more pleasant and lasting coexistence.

Puppies With Scabies: Causes and Symptoms
Scabies is normally contagious and causes strong itching in whoever suffers from it. Want to know about how puppies with scabies can be treated? Read along! Read more »