Why Do Cats Like to Lick Themselves so Much?

Has your cat ever licked you? Find out what this may mean and why they just like to lick so much! 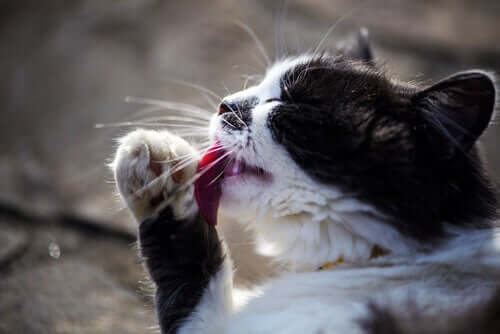 No one can deny that cats are very clean animals. Even to the point of hurting themselves from grooming so much! Would you like to know why cats like to lick themselves and others so much? In this article, we’ll unveil the mystery for you.

Why does my cat like to lick himself so much?

If you have a cat at home, you surely don’t need to observe them too much to notice it. You’ve probably seen them lick themselves more than once and on the same day too. Are they obsessed with cleanliness? Their meticulous cleaning sessions make you feel tired just by looking at them doing it.

Nevertheless, this is actually more than just related to the cat’s normal life and well-being.  A cat has different reasons to groom itself:

This is the main reason cats like to lick and groom all the time. For them, taking care of their coat and their appearance is very important. With every lick, they remove dirt and make their hair softer so it can isolate the temperature and be comfortable. In addition, cleaning the fur can stimulate the skin’s glands, and that allows for impermeabilization.

Cats have sweat glands on their leg pads (that’s where they transpire) and don’t have the ability to pant or to eliminate fluids through other mechanisms such as perspiration. Therefore, one way to avoid heat is to put saliva on their skin.

When the animal is under a high degree of stress, it will likely groom itself more than usual. As a result, through grooming the cat is able to reduce stress at critical times. If you see them licking their back and flanks, it’s because they feel upset, threatened or cornered.

It’s also common to observe nervousness or stiffness if they groom their mouths and whiskers roughly. This may mean that they’re facing internal conflict and are looking for a way out of this momentary paralysis.

Still related to the previous paragraph, cats use their tongues to avoid confrontations with other cats or animals. When two cats are about to confront each other and one of them doesn’t want to fight, they’ll start to groom themselves. It could be their way of saying “I’m not looking for trouble” or “Everything is great between us”.

If a cat isn’t grooming on a daily basis, it could mean that they’re uncomfortable or sick. Very dirty or neglected cats are likely to feel pain or be in danger. This is often the case with stray animals. They need to be constantly attentive and on guard, and thus have no time to groom themselves. On the other hand, if we can see that they’re clean and soft, then this means that it’s a cat with no worries.

Why do cats lick each other?

Another reason cats like to lick each other is the social bond they share. It’s an indication that there’s a good relationship between them. It can also be a kind of love ritual and an affection demonstration between the members of their nearest family group (which may also be composed of people). Females are more prone to this kind of affection for others because of their motherly instinct.

These are some reasons why cats lick each other:

1. They get along well

If there’s a bond of trust and friendship, it’s likely that a cat will lick another one. These sessions provide relaxation and help them feel comfortable. Pay close attention, because perhaps what begins as an act of love will become a confrontation. In that case, after the licking comes the biting and slapping.

2. They look after each other

It’s more likely that the older cat will lick the younger one (or that the new member will receive the care of the one who already lived at home). It’s the same thing that a mommy cat does with her kittens.

3. They heal each other

If you see one cat licking the other with persistence and in the same spot, take the cat receiving the attention to the veterinarian, as it could mean that he has some illness or physical pain. It’s not always a serious problem though. Maybe it’s just a bump, a skin rash or some parasites. Felines have the ability to “see” symptoms where others don’t.

We hope you found the information in this article helpful! See you next time.

Why Does My Cat Lick Me?
Cats are wonderful and amazing beings. Although many say that cats are very independent pets, they are also affectionate and love spending time with their owners. The demonstration of affection from our four-legged friend can draw our attention ... especially because of the texture of a cat's tongue when he licks you. Read more »
Link copied!
Interesting Articles
Cats
The 5 Most Majestic Cat Breeds