Do You Think Dogs and Cats Can Be Friends?

"To fight like cat and dogs" means "to fight or argue a lot or in a very forceful and angry way." However, humans have been fighting like cats and dogs before they even had any cats and dogs around to blame. Let's find out if this bad reputation is true. 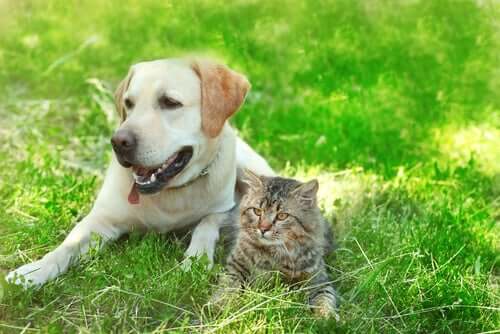 In spite of the myth created around canine-feline relationships, dogs and cats can be friends –with a few exceptions, of course. Let’s find out more about it.

There are all kinds of arguments that try to explain why dogs and cats can’t be friends. At the same time, there are many accounts from people claiming to have both animals at home. Not only that but they tell us how their animals not only get along wonderfully, but they truly care for each other too.

Dogs and cats can be friends…can’t they?

Dogs are totally dependent and cats aren’t, but in spite of their differences, there’s definitely something about that physics principle that says that opposites attract. It kind of makes sense – every animal is electrically charged, after all.

However, when two animals don’t know each other, especially when they don’t belong to the same species, then their reactions are hard to predict.

In many social interactions, things sometimes change when there’s trust. Even though, as you know, familiarity breeds contempt. Not in this case though; when dogs and cats gain each other’s trust then their friendship is forever.

Dogs and cats can become friends after they live in the same household for a very simple reason: they’re very sensitive and respond well to the feelings of those around them.

Members of the pack

Once a dog and a cat live together, there are a few things that may happen:

It’ll depend on the individual personalities of both animals, and on what kind of experiences they’ve had in the past and how well-socialized they are.

The main thing is that when two animals live in the same household then they become members of the same pack, so they’re like family. They don’t really care about physical differences. From their perspective, they both play for the same team. Furthermore, your own attitude also plays a huge role in their successful coexistence.

How to keep your pets from fighting like dogs and cats

Sometimes animals feel their territory is being threatened and that’s why they react defensively. For example, if you already have a dog and then you bring home a cat, your dog may feel it’s about to lose your love (and your food!) and their special friendship with you.

The same thing could happen with a cat. Regardless of whether you already have another animal at home or not, there are some guidelines you must follow to make their meeting a hit:

So, “to fight like dogs and cats” is nothing but a myth. We’ll leave you with this old cartoon of a friendship between a dog and a kitty that’ll just melt your heart. It’s a rather irrefutable sample of the very special friendships dogs and cats can have.

The Differences Between Cats and Dogs
There are so many differences between cats and dogs and in this article we'll be seeing to what extent you can train your cat. Read more »
Link copied!
Interesting Articles
Hamsters and Rodents
Stress in Guinea Pigs: All You Need to Know