Due to a congenital defect, there are certain dogs that are diagnosed with lameness between 4 and 12 months old, which can be degenerative if not treated. 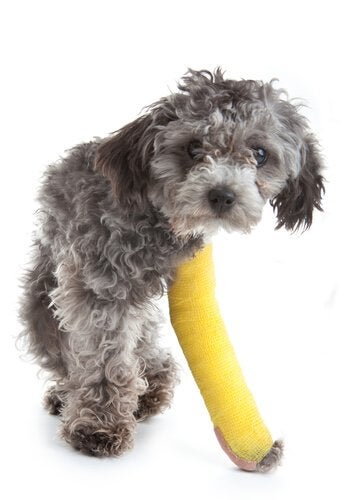 Small dog breeds have many common traits that are beyond their size. For example, many of them limp due to a disease that’s known as Legg-Calvé-Perthes disease. Continue reading this article to find out more.

Limping in small dog breeds: what to know

Small dog breeds are more likely to have a disease called Legg-Calvé-Perthes disease, in which blood doesn’t reach lower limb muscles properly. This results in some difficulty walking and limping to different degrees.

This disease is also known as “avascular necrosis” and it mainly affects the femoral head. This disorder causes atrophy, and in some cases, it’s very painful. It’s diagnosed when an animal is between 4 and 12 months old. Also, if it’s not treated, it can be degenerative and also affect their hips.

Some veterinarians recommend using slings for small breeds that limp due to LCP disease. They also recommend resting and immobilizing their limbs. However, in many cases professionals end up deciding to perform surgery to reverse the situation, especially in severe cases.

Limping in small dog breeds due to a dislocated kneecap

Another reason why small dog breeds might limp is because of patellar dislocation. The patella is an ossification of the tendon and is located in the quadriceps. This problem is hereditary, although it can worsen due to nutritional or environmental factors. In addition to pain when walking, the animal is likely to “hop” while walking. Also, it’s worse if the animal is overweight or must exert himself.

This type of limp is common in small dog breeds because it’s a congenital defect. At birth, their knees are healthy, but as they grow, the groove in their femurs loses depth, and the kneecap circulates freely. This makes it come loose and complicate walking.

Unlike LCP disease, patella dislocation can occur on either the front or rear legs.

Small dog breeds are more prone to limp from a young age when they have Legg-Calvé-Perthes disease. However, some begin to have symptoms in adulthood. The following dogs are vulnerable to this problem:

This dog, which originates from the Mediterranean island of Malta, although it became famous in Italy, is quite a healthy dog breed. However, they can limp, mostly because of problems with their knees and kneecaps. You’ll need to make sure they don’t become overweight.

This small dog breed that’s native to England — created in the midst of the Industrial Revolution — can have many health problems. These include patellar dislocation, skin allergies, heart problems, cataracts, dry keratitis, and a delicate digestive system.

This is another one of the small dog breeds that often limp, much more often than the other sub-breeds (large, medium, or dwarf). The toy poodle measures up to 28 centimeters, and that trait is what differentiates them from other poodles.

The pug is a dog breed from China that was bred in the United Kingdom. It has become quite “famous” in recent years. They are mollesors and have Brachycephalic Airway Syndrome due to their flattened nose. These dogs can’t stand the heat and they have difficulty breathing.

However, these dogs usually suffer from obesity, because they eat a lot and don’t like exercising. That makes things worse and increases the chances of limping because their joints can’t bear so much weight when walking.

If you see your dog limping when you take them for a walk, you should identify what is causing it.  Maybe your dog has tripped or has pain, or something is stuck in his paw pad. However, if they continue to limp for several days, then you should schedule a vet appointment so he/she can check your dog, especially if it’s a small dog breed.