The Most Common Hamster Illnesses

A number of the most common hamster illnesses can be fatal for your little friend, so it's important to know what the symptoms are. 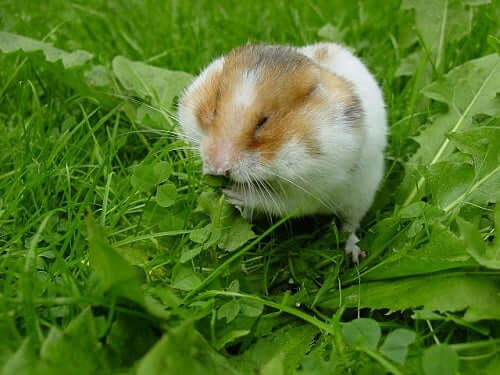 The common hamster illnesses can really knock your little friend off balance, and knowing how to recognize and prevent them is very important in order to keep your hamster happy and healthy.

Diarrhea can be common

Diarrhea is not an illness in itself, but it’s the most frequent symptom of the most common hamster illnesses. It can pose a serious risk to their health as they can get severely dehydrated in a very short space of time.

The main causes of diarrhea in hamsters are:

If your hamster has diarrhea, go straight to a specialist vet. Make sure you keep your hamster as hydrated as possible and ensure that their environment is clean.

Hamsters hardly ever get sick in their natural habitat because their body is quite resistant and their intelligence helps them avoid predators and stay safe.

However, by being domesticated, they can be exposed to various imbalances due to changes in environment and diet. This means that it’s your responsibility to make sure that these things are just right for them.

Below, we’ve listed the most common hamster illnesses and their main features and causes.

An abscess is a lump that forms under the hamster’s skin and you will be able to feel it. This happens due to an accumulation of pus caused by an infection.

Normally, the infection is the result of an injury or a bite from another hamster. But this will happen if the wound isn’t properly cleaned and disinfected.

Abscesses can often form near the hamster’s cheeks and make them look swollen. It’s important to spot these earlier as things can get more complicated if the abscess ruptures.

Once the abscess is developed, there’s only one thing you can do, and that is to have it removed by a vet. It goes without saying that you can’t do this yourself.

“Wet tail” is one of the most common hamster illnesses and has a high mortality rate. It can affect hamsters of all ages but is more common when they’re very young, just after weaning. At this point, they experience a radical change in their diet.

As the name implies, the infected animal has a permanently wet tail due to constant diarrhea. This means that there is a high risk of the hamster becoming dehydrated and dying in a short space of time. This imbalance in the body is normally caused by an unbalanced diet or a sudden change in diet.

Flu and colds affect hamsters in much the same way as they affect humans. As a result, the symptoms are very similar: fever, sneezing, lying down a lot, wet nose, etc. Again, in this case, it’s important to go straight to the vet as soon as you recognize the first symptoms.

Unfortunately, their little body is very vulnerable when infected by the influenza virus. Most hamsters develop pneumonia and, as a result, the mortality rate is high.

Outbreaks of flu and colds occur during the winter, so it’s important to take extra measures during colder seasons. Pay special attention to the air conditioning and heating in your home and the location of your hamster’s cage.

Diabetes is another of the common hamster illnesses which have similar symptoms in humans. The Campbell’s dwarf breed is particularly vulnerable to this illness.

Diabetes is caused when the pancreas doesn’t create enough insulin. As a result, the body is unable to control blood sugar levels. This means that a lot of glucose is no longer converted into energy and remains “stuck” in the body.

Then, the hamster enters a “state of starvation” because the body isn’t making use of the glucose. This is why diabetic hamsters can eat a large amount of food and quickly gain weight. An animal that always seems to be hungry is often suffering from diabetes.

Hamsters can develop tumors in different parts of their bodies, particularly when they’re older. They normally take the form of solid lumps under the skin, so it’s important to pay attention to any physical changes in order to spot tumors early.

Obviously, in such a case, it’s essential that you go straight to your vet. If possible, the tumor will need to be removed.

Ultimately, to keep your hamster happy and healthy, you need to pay close attention to any notable changes, pay regular visits to the vet, and ensure that they’re properly dewormed.

All You Need To Know About the Behavior of Hamsters
Most people have a pretty good idea when it comes to how cats and dogs behave. But how much do you really know about the behavior of hamsters? Read more »
Link copied!
Interesting Articles
Illnesses and Treatment
Treatments for Pulmonary Edema in Dogs