What Are the Causes of Otitis Externa in Dogs?

When faced with an otitis externa in dogs, it’s best to go to the vet to determine the cause and get a prescription with adequate treatment. However, certain advice can be followed from home. 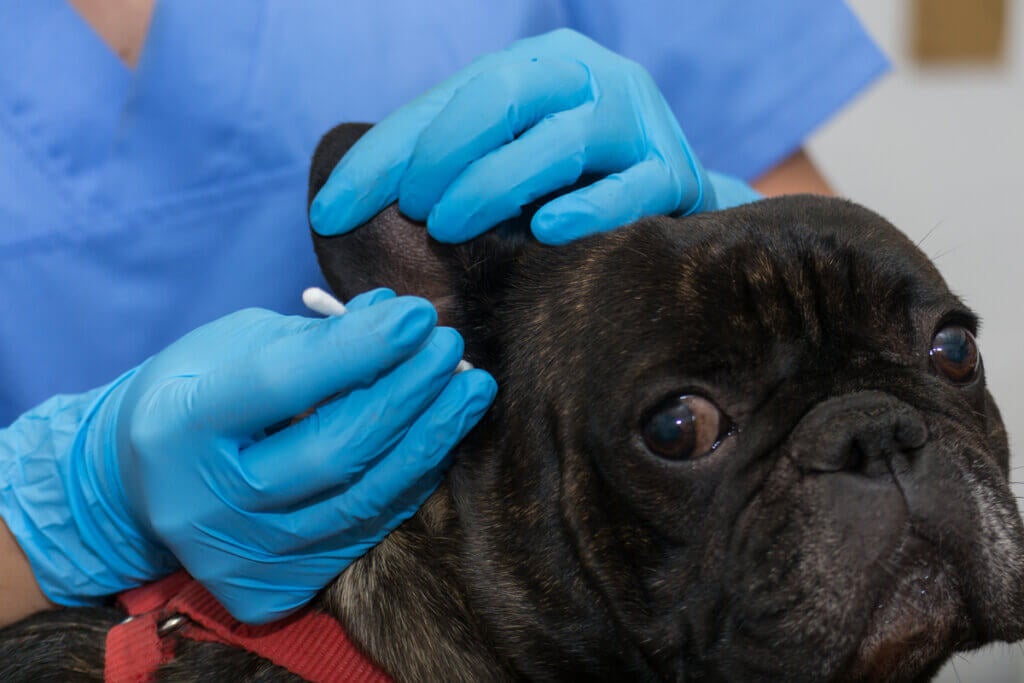 Otitis externa in dogs is a fairly common problem, especially in certain breeds with large and floppy ears which, due to their morphology, have little ventilation in that region.

This condition can cause a lot of itching and discomfort to the animal. As keepers of dogs, it’s important to maintain a regular cleaning of your dog’s ears, as well as going to the vet in case of an infectious outbreak. Today, we’ll explain all the possible causes of canine otitis.

The symptoms of otitis externa in dogs are quite evident, so you’ll have no problem identifying them. Below, we’ll list the most common clinical signs of this illness:

In view of these signs, it’s important to go to the vet to perform an examination and detect the cause and type of otitis that the animal is suffering from. A quick detection will always facilitate the dog’s treatment and recovery.

What causes otitis externa in dogs?

Otitis externa can have very different causes, so the treatment can vary according to the triggering agent. For this reason, it’s very important to go to the veterinary clinic in order to receive a suitable diagnosis. Next, we’ll show you the most common causes of canine otitis.

There are many infectious agents that can affect a dog’s ear. Among them, we find the following:

Presence of a foreign body in the ear canal

It’s very common for the cause of otitis externa to be some sort of spike that entered the duct during a walk, in which case it’ll have to be removed. Don’t try to do it at home because you could insert the spike deeper into the ear. The vet will extract it using the appropriate technique and instruments.

Otitis externa is the inflammation of the mucous membrane of the external auditory canal, and is frequent in dogs with droopy and heavy ears, because poor ventilation of the canal favors the proliferation of bacteria and yeast. It can also be common in dogs with small ear canals or with abundant hair in the ears, such as the Yorkshire Terrier.

Apart from the previously described reasons, there are also other causal agents that can cause otitis in dogs. We’ll name some of them briefly:

Treatments for otitis externa in dogs

In case of an otitis externa, the vet at the clinic will clean the animal’s ear and may take a sample of the discharge, which will be examined under a microscope to determine the agent causing the otitis.

Depending on the cause of the pathology, ear cleaners can be applied with antibiotics, acaricides or antifungals depending on whether the causal agent is bacteria, mites or fungi. The vet may also prescribe an anti-inflammatory to the dog to reduce inflammation or an analgesic to relieve its pain.

Many of these medicines are available only with a veterinary prescription, so you’ll have to buy them at the clinic or at the pharmacy with the prescription signed by the vet.

Otitis can have complications, and some dogs live with chronic otitis all their lives and need more frequent cleaning and check-ups at the vet. Sometimes, excessive scratching and shaking of the head can cause internal bleeding of the ear, called otohematoma, which requires surgical intervention.

Prevention of otitis externa in dogs

As a preventive measure, the pet’s keeper should perform a periodic cleaning of the ear to avoid relapses. Obviously, as in many other cases, good hygiene is the best treatment.

There are ear cleaners especially designed for dogs, so the ones for humans can’t be used for dogs. In addition, avoid using swabs, and use instead clean gauze to remove the bits drawn out by the ear cleaner.

A Dog’s Origins According to its Ears
The shape of the ears is an important characteristic in dog breeds. Can you know a dog’s origins based on its ears? Read on to find out! Read more »
Link copied!
Interesting Articles
Illnesses and Treatment
What Is Canine Mastitis?