What Are the Most Common Disorders in Senior Dogs

All dogs need care, but senior dogs require it even more. Unfortunately, diverse pathologies can make the final years of an old dog difficult. 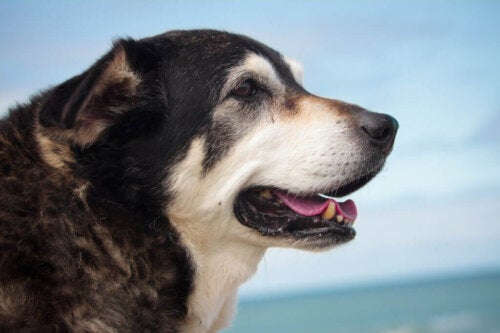 The inexorable passage of time, in greater or smaller measure, always causes damage to our bodies. In the case of senior dogs, with a life expectancy shorter than ours, old age and disease become evident far too soon. Senior dogs have a certain predisposition to some diseases, which in younger animals aren’t common. Next, we’re going to explain the most common disorders in senior dogs.

At what age is a dog considered senior?

It’s important for each owner to know at what age their dog is considered senior. Due to the enormous breed diversity among dogs, the classification is very diverse. In general, we can classify this species according to their weight as follows:

These are rough numbers as it’s the vet who can really tell at what age the animal is considered senior. Of course, factors inherent to the dog —such as genetic illnesses— may overturn these general guidelines. Once this issue has been clarified, it’s time to list the most common disorders in senior dogs.

The heart is the body’s clock, which marks the rhythm of our life with its beat. Over the years, it works tirelessly throughout millions of contractions. For this reason, it’s not strange to think that it can be one of the most affected organs in senior dogs.

The arteries and veins the blood circulates through also suffer damage over time. Their walls lose elasticity and fill with deposits of fatty substances, among many other events that make the circulatory system age.

All this means that the occurrence of this type of disease is more frequent in geriatric animals. Among the most frequent cardiovascular pathologies associated with old age, we find the following:

The locomotor system is the “machinery” that moves the entire body, and it also suffers ailments with the passage of time. For this reason, these types of diseases are more frequent in older dogs, especially in large breeds. This happens because their size means greater wear and tear of the bones.

Among the most common processes, we can mention the following:

The nervous system is one of the most affected ones in older animals, because neurons use a high amount of energy. This makes them more susceptible to degeneration due to oxidative stress, the result of their accelerated metabolism.

The most frequent neurological disorders of senior dogs are the following:

Organic homeostasis has a very delicate balance that involves a multitude of factors. Old age creates a predisposition to certain pathological processes that are infrequent in young animals.

Hormone-related diseases often appear slowly and insidiously. We’re talking about pathologies such as the following:

Similarly, there are a number of other common disorders in senior dogs that can complicate the final years of their life. For example, the decrease in body defenses typical to this old age makes them more susceptible to suffering from infectious diseases.

Problems of the sense organs are frequent as well. Ocular disorders, such as cataracts or glaucoma as well as loss of hearing, frequently occur in older dogs.

As we’ve explained, many various diseases can affect older animals. Therefore, it’s essential to increase the number of veterinary check-ups that senior dogs have. Thus, we can detect disease early and treat our senior dogs adequately.