Why Do Cats Live Longer Than Dogs?

As a general rule, cats live longer than dogs. However, a cat's lifespan depends on a number of different factors. 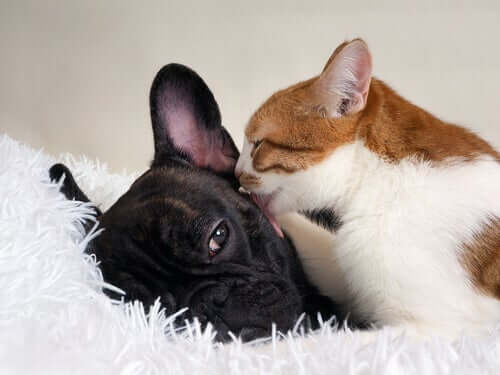 Dogs and cats are the two most popular pets in the world. Some people are cat-lovers, others are dog-lovers, and some get on perfectly well with both. Cats and dogs have their similarities, as well as their differences. For example, have you ever wondered how long each of them lives? Do cats live longer than dogs?

How long do cats live?

Providing it’s healthy and gets all the care it needs, a common domestic cat can live 12 to 15 years on average. Stray cats usually have a shorter lifespan than those with homes. Of course, this number depends on a variety of different factors, and not all breeds have the same life expectancy.

As with dogs, artificial selection has given some breeds a genetic predisposition to certain diseases. In other words, a cat of one particular breed is more likely to develop a disease than another, because of its genes.

For example, Persian cats are prone to developing chronic rhinitis and eye problems, due to the shape of their face. They’re also more likely to suffer from polycystic kidney disease. That said, they’re generally a fairly long-living breed, and can live up to 17 or 18 years.

Several other factors can directly influence how long a cat will live:

How to increase your cat’s lifespan

How long your cat will live will depend – at least in part – on the care it receives. To be happy and healthy, a cat needs:

Why do cats live longer than dogs?

As a general rule, the average life expectancy in cats is longer than in dogs. However, as we’ve already seen, the number of years an animal lives depends on so many different factors, with genetics being one of the most important.

There have been cases of cats that have lived for more than 25 years. One example was Creme Puff, the oldest cat on record, who died in 2005 at the age of 38. Another cat, Nutmeg, lived to the age of 32.

What Is The Life Expectancy of Dogs?
We want our dogs to be with us for many years to come. Let's take a look at factors that affect the life expectancy of a dog. Read more »
Link copied!
Interesting Articles
Oral Hygiene
Caring for Your Cat's Teeth: How and Why