Why Does Your Dog Have Yellow Feces?

Does your dog have yellow feces? Learn about what this can mean, and if you need to take your dog to the vet - read our article to find out! 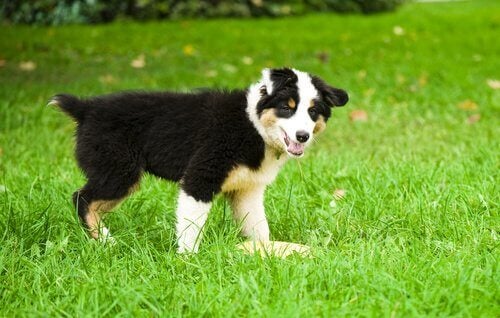 If something is wrong with your dog, then its body will often give you some signs. Feces can be a good indicator of what’s happening to your dog. Sometimes your dog might have yellow feces. What do these mean?

Could yellow feces be a sign that something’s gone wrong with your dog? In this article we’ll learn all about this topic.

What do your dog’s yellow feces show?

Normally, yellow feces are a consequence of some kind of a digestive problem, either an irritation or an infection. What makes them yellow? It’s because of a mucus that is a kind of lubricant that helps your dog’s feces come out of its body and not get stuck.

However, this mucus shouln’t be yellow, but rather transparent. So, when it’s this color, it’s a sure sign that something’s not right with your dog’s digestive system. The more serious the problem, the brighter yellow the feces will be.

On some occasions, yellow feces might show some allergy to a certain food, or an obstruction in the intestinal tract. So, don’t get alarmed, but it would be a good idea to consult your vet to find out the possible cause.

Here are some other possible causes of yellow feces in your dog:

This is an intestinal infection caused by protozoan parasites. When the dog, by eating contaminated food or eating something in the street, ingests the parasite, this opens in its stomach and frees a trophozoite.

The trophozoite is the active form of parasites, and these are the kinds that attack and cause infections. In this case, they stick to the wall of your dog’s intestine. Later, they divide and then some stick to your dog’s feces, making your dog feces yellow.

Additionally, if your dog has these parasites, its feces will also smell bad, and be slimy, pale and greasy.

You should take your dog to the vet to get it checked out if you notice these symptoms.

Diarrhea can cause yellow feces in your dog

Diarrhea can be another cause of yellow feces. When the feces turn this color, it means that they are passing through the intestines too quickly. Diarrhea with these yellow feces could indicate an intolerance to certain foods. If that’s the case, you may need to change your pet’s diet.

There are medicines available to treat certain diseases that can cause diarrhea with yellow feces. For example, there is a treatment against parvovirus, and pills for the pancreas.

The age of your dog

If your dog is still a puppy and drinks too much milk, this could cause yellow feces. However, although this might not seem to be a worrying cause, it could cause an infection, which means it would be best to treat it as soon as possible.

If your dog is much older, it may have a weaker defense system and might not be able to effectively fight against infections and diseases. Therefore, if it passes yellow feces, it’s important to take it to the vet as soon as possible.

However, yellow feces aren’t the only sign that could show you that something’s wrong with your pet.

Other problems that can show up in your dog’s feces

Apart from yellow feces, there are other anomalies in feces that can give you signs of something being wrong with your pet. For example, if feces appear with blood.

These can certainly be more dangerous than yellow feces, since as a general rule these show that something more serious is wrong. You should treat this as more urgent.

It could possibly mean a tumor. With that in mind, it’s recommended that you take your pet to the vet as soon as possible.

However, don’t become too alarmed at first. Feces appearing with blood could also mean:

The best thing to do is always keep an eye on your dog’s feces, so as to know if there’s a problem as soon as it happens.

How to Treat Diarrhea in Dogs
Maybe your canine companion suffers from diarrhea due to eating a food that had gone bad, although there are other possible reasons. You must be responsible and think about why he is suffering from it, and ensure his well-being Read more »
Link copied!
Interesting Articles
Oral Hygiene
Caring for Your Cat's Teeth: How and Why