Why Is My Dog Licking the Wall?

There are lots of things that dogs often do that seem to us to be completely bizarre. Today, we're going to talk about why your dog might lick the walls. 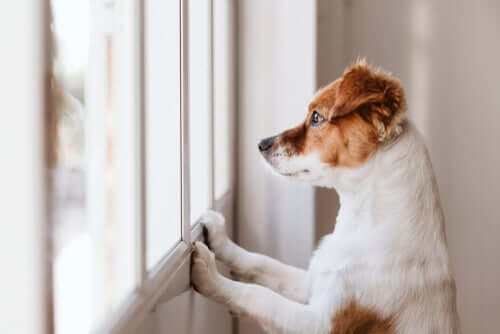 Understanding your dog’s behavior can be a real headache, especially when they do things which seem to be completely inexplicable. Rolling in the mud when they’ve just had a bath, chewing a sweaty sock, rummaging through the trash… maybe you even see your dog licking the wall. Behind all these strange behaviors there’s always an explanation. You just have to put yourself in their position and try to understand it.

Today, we’re going to take a look at why your dog might lick the wall. To do this, you need to think like a dog, run like a dog, eat like a dog… or maybe you could just carry on reading.

The wall, not easy to digest

First of all, it’s interesting to note that eating non-edible substances is something that scientists have studied extensively. In particular, it’s studied by veterinary ethologists and nutritionists, and if you know anything about these two fields, you’ll know that the reason for your dog licking the wall is probably related to nutrition or behavior.

This condition is called pica, and it’s defined as the ingestion of materials and substances that are not part of the animal’s usual diet. Obviously, a wall isn’t something that dogs normally try to eat.

On the face of it, there’s no reason they should be doing this. When a dog rummages around in the trash, they’re probably looking for some leftovers that you’ve thrown away. But a dog licking the wall is harder to explain.

As we’ve already hinted at, the main reason is probably a behavioral disorder. Dogs are very intelligent animals and have a great capacity to develop complex emotions. Although this is one of the reasons that they’re such popular pets, it also has a downside, since it means that their mental health has a significant impact on their well-being.

When your dog gets stressed, bored, or anxious, it may lick the wall in the same way that we bite our nails. It’s nothing more than the manifestation of the emotions that they’re feeling.

In turn, these feelings can be triggered by all sorts of things, so it’s a good idea to seek some advice from a professional. However, in the meantime, here are a few things that might cause your dog to feel this way.

There is quite a lot of evidence to suggest that nutritional deficiencies can cause dogs to develop pica. If a dog is suffering from a particular deficiency, they may try to compensate by trying to eat pretty much anything.

Many walls are made of gypsum (calcium sulfate), and calcium is a fundamental mineral. So, if your dog has a deficiency… they have a whole wall of calcium to lick. However, this isn’t often the reason for pica. Most commercial feeds contain the right balance of nutrients to prevent any deficiency. Animals that suffer from nutritional deficiencies are usually fed homemade diets based on leftovers

Is your dog licking the wall? Talk to your vet

As you can see, although it might seem a bit strange and funny to begin with, there could be a serious reason behind your dog licking the wall. If you have any doubts at all, make a visit to your vet to ask for advice.

Treatment for Coprophagy
The act of eating feces is a harmful behavior for dogs because it will cause health, eating or behavioral problems. Read more »
Link copied!
Interesting Articles
Health
Inbreeding Depression and How It Affects Dogs