The common viscacha is often hunted for their juicy flesh and hides. Continue reading to learn more about this large rodent. 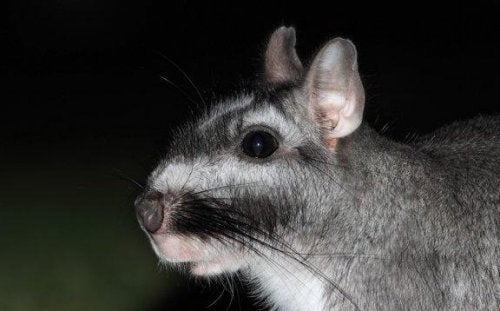 Lagostomus maximus is the scientific name for the so-called viscacha, a large rodent that lives in some areas of South America. They have gregarious habits and have a wide repertoire of voices they use to communicate.

The only living species of its kind

Also known as the viscacha of the plains, it’s the only living species from the Lagostomus genus. It’s part of the Chinchillidae family.

However, it’s worth noting that viscacha — a Quechua name — is also used for 4 other rodent species:

Anyway, instead of overwhelming you with so many details, we’re only going to talk about the common viscacha.

Let’s look at the common viscacha, a large rodent that lives in South America.

This South American rodent has a sturdy and round body that can reach up to 65 cm in length. They have short front legs and four fingers with thick nails that they use to dig.

They also stand out because they have a black stripe across their face that begins at their snout and crosses their cheeks. This separates the lower white part (around the mouth) from the upper white band that’s around his eyes.

Other traits of the common viscacha are:

The common viscacha’s habitat and diet

This rodent lives in the grasslands and shrub prairies. They can be found at up to 1900 meters of elevation. Also, they form colonies of up to 50 individuals in which they peacefully coexist, except during mating season.

There are between one and three adult males in each of these colonies while the rest are females and young viscacha. However, they don’t tolerate members of other groups.

They live in burrows that they make by digging with their front legs. These burrows have tunnels that connect to each other. These shelters have several exits and can reach up to 700 square meters.

When the sun goes down, the viscachas leave their burrows to feed. However, it usually won’t go far from the shelter. Their diet is made up of herbs, shrubs, and seeds.

The females go into heat during the fall. That’s when the males get into violent fights with one another. Once they find a mate, they mate inside their burrow. Then, after about five months of gestation, two babies are born that weigh around 200 grams.

Males reach sexual maturity at the age of one and a half. At that time, the young tend to leave the shelter and dig their own homes.

The females — who sexually mature between eight months and a year — stay in the colony they were born into.

A species hunted for their flesh and hides

With a life expectancy between seven and eight years, the common viscacha doesn’t have any serious conservation problems in most of the areas they live.

However, in certain places, they have begun to disappear due to overhunting. They are sought after for their hides and delicious meat, which is marinated.

Floods are also another reason why they are disappearing. In some regions, people try to fight them off because they cause great losses in agriculture.

Rats As Pets
Only a few species of rats can be kept as pets, and it's because only those that grow up around humans are friendly and docile Read more »