Becoming A Cat's Friend: What does science say?

The key to becoming a cat's friend is to adopt your cat according to their personality and making sure they connect with you. 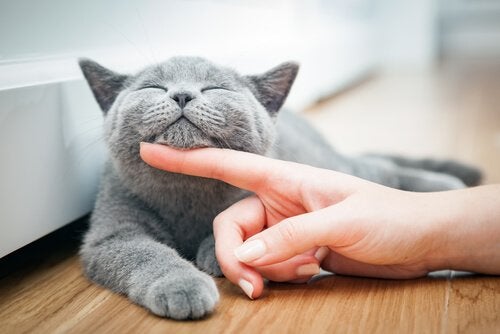 Some cats have a reputation for being grouchy and not getting along well with humans. Although cat owners know they can be very affectionate animals, scientists have studied the best ways of becoming a cat’s friend.

Becoming a cat’s friend, according to science

Over the last few years, there have been many scientific studies based on animal behavior. Scientists have studied everything from their intelligence, their ability to problem solve, to information on how to better interact with animals.

These latest studies can give us a closer look at the on the best way of becoming a cat’s friend. Here is a series of scientific conclusions about the best way to approach a cat or how to facilitate your interactions with your pet at home.

As often happens with these kinds of conclusions, you might be able to imagine some of the advice. However, some scientists have come up with unexpected and surprising answers.

1. Let them take the initiative

Two Swiss studies came to the same conclusion: when becoming friends with cats, the best way is to let the cat approach and touch you. If you pet the cat before if he gives you permission, you’ll start the relationship off on the wrong foot.

One study that was conducted with 50 feline participants consisted of humans waiting for the cat to approach. The cats that approached quicker, tended to run away less. Another study showed that cats stayed and played longer when an introduction that was done in this way.

2. If the introduction isn’t going well, give the cat their space

Cats have very expressive body language. However, few people pay attention to the signals cats use to show they are uncomfortable or annoyed. For example, shaking their tails or flattening their ears.

Studies show that if a human respects these signals and moves away or stops petting the cat, the cat is more likely to return in a shorter amount of time. Also, during the next interaction, the cat will spend more time before having a negative reaction.

Cats are loving, independent animals. Too much physical contact can be overwhelming for cats. However, if people stop petting them when the cats ask for it, they end up wanting to get petted even more.

In 2017, a study with cats showed that cats prefer games with humans for food. In addition, cats preferred to play with humans if there was a toy involved. However, the type of toy depends on the preferences of each cat.

Cats are predators as well as social animals. Playing is part of their natural instincts. If you play with your cat and give them the opportunity to stalk and hunt small toys, you’ll strengthen your relationship with your cat. In general, their behavior will also improve.

4. Adopt a cat that matches your personality

When it comes to adoption, experts conducted several statistical surveys. One study interviewed people who adopted adult cats. They found that people attribute different personalities to cats based on the color of their fur, although this has no influence on their actual personality.

Another survey was about the lives of adults who adopted cats. Humans who noticed the cat’s personality prior to adoption reported significantly higher satisfaction with the behavior and the relationship they have with their cat.

Most shelters clarify that in order to have a successful adoption, the personality of the animal and the owner must be taken into consideration. If you have any doubts, the best option is to get to know the cat better. Just like with people, when becoming friends with cats it’s important to pay attention to their personalities.

5. Don’t leave the cat outside

A study done in Italy showed that indoor cats that don’t go outside are more affectionate and docile with their owners than outdoor cats that wander around at night or during the day.

In recent decades, experts have conducted many different studies on animal behavior. These are just a few examples that are helpful for becoming a cat’s friend and how to understand them better.

Always play with your cat, let them decide when to start and end games, and, above all, adopt your cat according to their personality, not based on how their looks.