How to Care for Cat Colonies

There are a number of things you can do to help these abandoned cats on the streets. You can provide them with proper nutrition, monitor their health, neuter them, and promote their adoption. 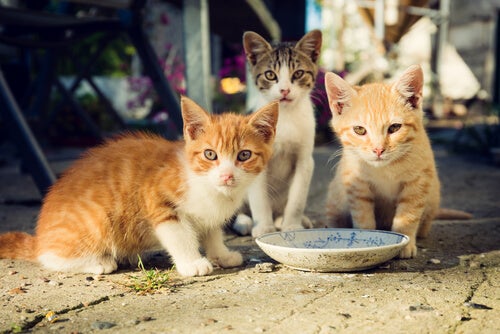 Cat colonies live on the streets of every city. They help control insects and get rid of rat plagues, but they also don’t get all the food or protection they need in an urban environment. If you want to take care of a cat colony, here are a few tips:

The importance of caring for cat colonies

Contrary to what many people believe, to get rid of cat colonies on the streets, you can’t move the animals or make them go away.

It has been proven that the only effective way is to reduce the number of stray cats around the entire city. If all the cats in the same area disappear overnight, animals from another colony will come and take their place.

Even though having these colonies around is beneficial for humans because they eliminate rats and insects like cockroaches, street life isn’t easy for cats. However, we are capable of making a balance between taking care of the cats in a colony while controlling their health and overpopulation.

One of the basic parts of taking care of a cat colony is ensuring that they are fed. However, not all food is good for their digestive systems or for the cleanliness of the streets.

Cats are carnivorous animals, and all the fresh food you give them should be raw and only contain meat. Likewise, if you’re going to put the food on the street, pure cat chow is the most hygienic.

Leaving leftovers of home-cooked food in a colony is detrimental for everyone. For cats, because cereal, fried foods, and vegetables upset their stomachs, and for humans, because it attracts insects, smells bad, and soils the street. You should only feed a street colony with cat chow.

In order to maintain the hygiene of the area, you should clean the dishes where you leave the food periodically. If you use disposable containers, the right thing to do is to pick them up and throw them away when you see they’re empty. Cats don’t like to live around trash, and no one should leave trash on the streets.

Remember that cats should also always have fresh water available, especially in hot cities or during the summer. Change their water every day because insects like mosquitoes nest in stagnant water and can become a plague.

Keep in mind that taking care of a cat colony is much more than just feeding them. You also need to take care of the animals’ health. Contact a vet, since you’ll need his/her help from time to time.

The diseases that affect stray cats are quite varied, but they normally have colds, skin problems, fight wound, and eye infections. As much as it is within your means, you’ll have to medicate cats that have problems, because their well-being also depends on their health.

The only effective measure to bring down the number of stray cats is to neuter them and prevent from reproducing. In many cities, a trap, neuter, and return (TNR) programs are being launched, which are promoted by institutions and animal shelters.

Even if this isn’t happening where you live, there’s nothing to prevent you from doing it on your own. If you really want to take care of cat colonies, then neuter the cats. You can do it at the rate you want, and you can even ask for donations, or help from other people. If these animals aren’t neutered, there will still be new births.

Conduct a census of the cats in the colony, noting the neutered ones and the new, probably abandoned cats that show up. It’s essential to know the animals you are caring for.

It’s very difficult to adopt adult cats from colonies. Many do not want to be adopted. However, you can try to get the most docile adult cats, and new litters once they start eating on their own, off the streets.

You can get in touch with a shelter to help you look for people to adopt them, and screen people who could give those animals a good life. The shelter can make the job much easier because they have experience. Also, their ads to search for families may go farther than what you can do on your own.

Taking care of cat colonies is a difficult but very satisfying job. Set the example by your actions and teach your friends that people who care about stray animals are compassionate and hardworking. Only with everyone’s help can we improve the lives of colony cats.