The Importance of Natural Parks for Animals

These are areas maintained in an almost totally wild state so that the flora and fauna may be preserved in such a way that the ecosystem of species isn't altered. This is crucial, above all, for species that are in danger of extinction. 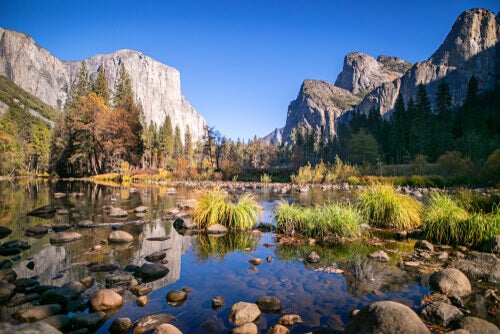 What is a natural park?

Natural parks are natural areas that have suffered little intervention from human beings, that is, they remain almost unchanged in their wild state. They’re especially relevant places, as they have distinctive characteristics in terms of beauty, fauna or flora. That’s why it was necessary to grant them protection.

Natural parks, like national parks, nature reserves or other similar categories, are protected and regulated by law. The management of these places depends on the country they’re located in, but normally it’s done with the intention of promoting respectful tourism and guaranteeing their conservation and health.

These places can be terrestrial or maritime. We can find protected areas in all kinds of environments: in the mountains, in the desert, in the marshes, in the reefs… any place with ecological importance can constitute a natural park.

The relationship between natural parks and animals

The importance of preserving natural parks relates to the protection of animals’ habitat. Not only large mammals, such as wolves or wild boar. They also affect fish, coral, and insects that live in woods.

Therefore, hunting and logging aren’t permitted in natural parks. No work that harms the flora or disturbs the animals may be carried out.

Nature parks are also reserves where animals can live in peace, without threats. They can reproduce and care for their young without any disturbance from humans. They can also hunt and develop their lives normally.

By respecting the place where they live, the food chain and life cycle of animals remains uninterrupted, and they can live free of danger: from beetles that live in the bark of the trees to fish that take refuge in the coral reefs.

Nature parks have groups of workers who look after their well-being: from foresters who measure the health of these environments to tour guides who convey the importance of natural parks for animals.

In these places, tourism remains regulated. The protection guarantees that people who enter these parks won’t damage or dirty them, nor bother the animals. The design of natural parks avoids overcrowding and, of course, prohibits the construction of tourist infrastructures that could damage them.

You can practice environmentally friendly tourism everywhere in the world, but in natural parks this is mandatory. Access for large groups, for example, isn’t permitted. On the other hand, the stay in protected areas is limited: camping isn’t allowed but, in some cases, access with vehicles is allowed.

You can’t make fires or throw garbage in these places. Responsible tourism sustains itself on leaving the place as it was when you arrived. Tourists can’t leave their mark on the place. Tourists are simple observers and their passage shouldn’t affect the place.

Some natural parks and their fauna

All kinds of ecosystems all over the world became natural parks and protected areas. The first natural park protected by law was Yellowstone in the United States just over a century ago. Today there are more than 100 protected natural areas in Spain alone.

Yellowstone became a protected park in 1872. It has an area of almost 900,000 hectares (3,475 sq mi) and contains lakes, canyons, rivers, a volcano and spectacular geysers. Hundreds of species of animals live in this park, many of them in danger of extinction. However, it’s the big mammals that grab our attention: grizzlies, wolves, moose and bison.

You can do tourism in this park. You can access the most spectacular geological areas and you can go hiking, mountain climbing and even take boat trips on the rivers and lakes. During all this time, the impact of the reserved areas and of natural parks for animals has been studied in this place.

In Spain, the oldest natural park is Doñana. This place is famous because it’s where the Iberian lynx is recovering. Nevertheless, its vast marshland is an important stopover for water birds’ migrations.

Natural parks are special places thanks to their own characteristics, both in terms of flora and fauna. Respectful tourism should be practiced in all ecosystems, as these places teach us the benefits of supporting conservation and little human intervention in nature.

Seven Natural World Wonders
In 2011, there was a contest to find the most beautiful places on Earth. We'll tell you about the seven natural wonders in this article. Read more »
Link copied!
Interesting Articles
Responsibility
Over 300 Species of Sharks and Rays in Danger of Extinction