Your Dog and Your Neighbors: Etiquette and Regulations

Currently, there are millions of dogs in the country. It poses a problem in buildings as your dog might be wary of your neighbors and vice-versa. 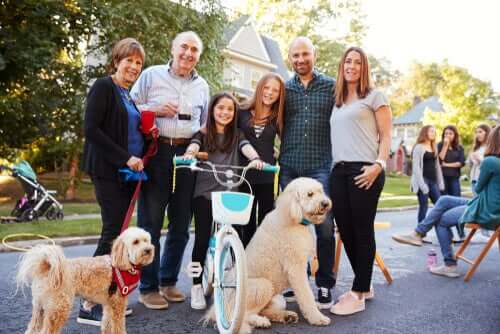 Currently, there are millions of dogs in the country. In fact, according to the 2015-2016 APPA National Pet Owners Survey, 65% of U.S. households own a pet. That equates to about 79.7 million homes. Most interactions between your dog and your neighbors are fine and dandy and you all often live quite peacefully together.

However, especially in urban areas where most people live in buildings, people frequently find themselves in the middle of disputes and confrontations with their neighbors. (As you know, dogs are often wary of their neighbors and vice-versa.) It only gets worse in more reduced spaces.

Obviously, you didn’t intend to have conflicts with your neighbors when you got a pet. However, you probably weren’t aware of the many issues and responsibilities that come with having a pet. So, if you’re not aware of them, then your overly adorable pet may end up being a nuisance to your neighbors.

In order to ensure the proper integration of your dogs and your neighbors, we’ll tell you about the possible legal implications of many problems caused by animals. We’ll also give you some tips on how to avoid these kinds of problems.

Your dog and your neighbors: what does the law say?

There’s no law that specifies how neighbors and pet owners should get along. However, the Horizontal Property Act is a statute that deals with cooperatives and condominiums. Each state has specific laws on horizontal property. These laws include all the regulations in force regarding housing and peaceful coexistence in such communities.

Note that it doesn’t prohibit the possession of domestic animals inside such dwellings. In other words, owners always have the right to share their living space with their pets. However, it’s established that every county can determine the maximum number of animals that can live together in the same home.

When it comes to rentals, the conventional wisdom is that dogs and apartments don’t mix. This is a particularly sad state of affairs. As households shrink and prices rise, more and more people are forced to move into smaller spaces. However, with a little cooperation between landlords, tenants, and dogs, many dog-guardians should be able to find a suitable rental.

These laws mention how a landlord and prospective tenant can work out a lease or rental agreement that’s fair to both sides. In addition, it also talks about no-pets clauses in leases. For example, when they apply and when they don’t. In regard to assistance dogs, no landlords can legally refuse to rent their apartment to disabled tenants with a trained guide or service dog.

Of course, most people understand that, when an animal causes damage to the neighbors or to the housing complex, then the guardian may end up being sanctioned for lack of compliance with the rules.

US legislation allows each neighborhood community to establish their own rules of coexistence. This is to ensure that all residents live in a safe and comfortable environment. These regulations mainly target common spaces. However, they can also intervene if your dog’s presence inside your home harms your neighbors in some way.

Homeowners’ associations may unanimously ban the possession of pets in the building or neighborhood property. However, pet owners can always challenge these rulings. Such prohibitions aren’t necessarily legal and, for the most part, the individual rights of a person prevail.

Likewise, the community could also take legal action against an owner in order to stop inappropriate or undesirable activities. All in accordance with the rules of etiquette and common courtesy.

In regard to dogs, this means you must control any excessive barking, and remove anything causing bad smells. In addition to this, you must ensure your pet doesn’t damage common areas and third-party properties.

What legal action can your neighbors take against you and your dog?

Initially, the president of the homeowners’ association must inform the dog owner, in writing, that their animal is being a nuisance and causing annoyance among the neighbors. They will request a prompt solution to the problems, or, if not, the animal’s immediate dismissal. In this letter, they must also inform the owner that, if the annoyance persists, then they’ll take them to court.

If the owner doesn’t take any measures to solve the problem, then the homeowners’ association may file an injunction against them. If approved, this action will ask the guardian to stop the denounced conduct and ensure it doesn’t happen again. Having said that, there must be plenty of evidence of inappropriate behavior before anyone can initiate legal action.

In general, there should be photographs, videos, or repeated police reports. They may also request that neighbors testify in court about the repeated offenses committed by the animal.

When it’s entirely clear and verified that the possession of an animal leads to incessant annoyance to the neighbors, then a judge will dictate an appropriate sentence. They’ll order the immediate cessation of the annoying behavior. Also, they may issue fines or request compensation for damages to third parties or common spaces.

In the infraction is a lot more serious, then the guardian may even be deprived of the right to use their property. So, do you have a dog and want to keep them with you? In that case, make sure you both comply with the rules of good conduct and etiquette.

How Moving to a New Home Affects Your Dog
We know just how much you love your dog and how you would never consider leaving them behind when moving to a new home. But you can do it. Read more »
Link copied!
Interesting Articles
Responsibility
Can I Keep an Owl as a Pet?