The Guardian Angel of Abandoned Dogs 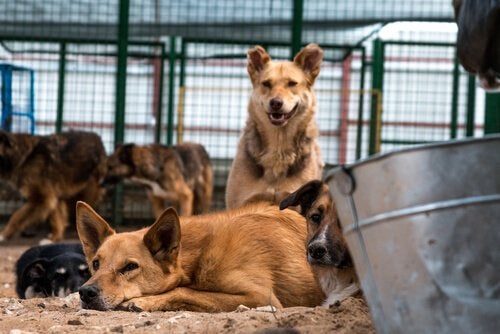 This is one of those stories that we love telling you about. It is one that moves us and touches our hearts. Unfortunately, abandonment is still a common evil, but we love to see that there are people willing to do their part in that fight. Today, we will talk about the guardian angel of abandoned dogs.
His name is Lee Asher. For a long time, he has had a “hobby” – he wants to sing and at the same time help others. Would you like to know his story? We’ll tell you!

A guardian angel with love for animals

Asher lives in Los Angeles, California. He has loved animals intensely ever since he was little. Helping them and taking care of those who need it most has always been one of his greatest vocations.
In fact, as a child, he spent hours and hours in a shelter near his home. There, he learned a lot about the rescue and care of animals, as well as the role that people who dedicate themselves to it have to fulfill.
He himself recognizes that “I always knew that when I got older, I would have a house full of animals that I would have rescued myself. That’s why being where I am is not a surprise for me or for those who know me.”

Asher and his peculiar family

Today, this man, this guardian angel, lives with 7 dogs and two cats. They were all rescued by him and are very well-adjusted to their environment and care.
His feeling about rescuing abandoned animals is that “not only are you saving a life, but also, you are allowing other animals that are abandoned to be adopted.”
Although, he “only” lives with 9 animals, he has rescued a total of 16. Of these, the rest have been adopted by other families who love them and treat them as they truly deserve.
We’re happy to hear stories from people like Asher, who are willing to give their time, energy and resources to such supportive work as animal rescue.

Others who have also been guardian angels

We love knowing that Asher is not the only one who has demonstrated sacrifice. There have been many other stories that we have told you about in My Animals that fill us with hope and move our hearts.

Like these, there are hundreds of stories around the world that shine a ray of hope, showing that there are still people who’s hearts are not made of stone. We hope that many more will appear over time.
It is true that abandonment is an evil that seems impossible to eradicate, but if we each do our part, we can achieve it. What could you do?

Link copied!
Interesting Articles
Responsibility
How to Instill a Love for Animals in Our Children