Airport Bathrooms for Pets Have Arrived

While many of us love traveling it does have its downsides, especially if you're traveling with pets. But now airports bathrooms have started to appear! 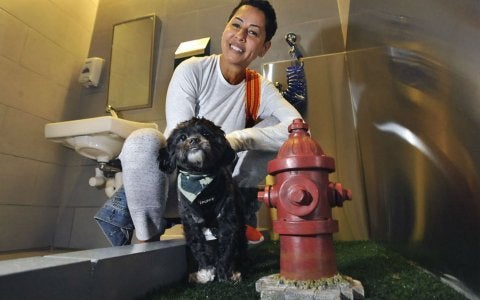 While many of us love traveling, it does have its downsides, especially if you’re traveling with pets. However, airports are starting to cater for our furry friends by installing the first pet airport bathrooms.

When you have a smaller pet, you need to keep it with you at all times. As a result, avoiding little accidents can be a bit of an issue. If you’ve ever traveled with your pet, you’ve probably asked yourself why there’s nowhere for you to leave them. Or at least somewhere they can relieve themselves.

Well, in the US, which often pioneers such initiatives, airports have begun installing the first pet bathrooms. In this article, we’ll be focusing on one of the most famous airports in the world, John F. Kennedy.

More and more people are traveling with their pets, which is why this world-famous airport decided to add a new door between men’s and women’s toilets. This door has a special sign: a paw print. Yes, a bathroom for pets.

So, what are these pet bathrooms actually like? They’ve tried to create a more natural setting, which imitates the kind of environment you’d find out on the street.

They’ve included a patch of earth, with a small fence and artificial grass. And as everyone knows how dogs love to lift their legs on them, they have even included a fire hydrant.

All this is designed to help your pets go to the toilet quickly. Obviously, they don’t want there to be a long line of desperate dogs and cats at the bathroom door.

As well as the fire hydrant, there’s also a dispenser with bags so that owners can pick up after their animals, and a small hose so they can clean the area. If everyone does their bit, the area will always be clean and odor-free.

Where did the idea of making pet airport bathrooms come from?

Faced with the large numbers of affluent passengers traveling with pets, especially from this particular airport, staff came to the conclusion that it would be best to provide bathrooms for them. Why? Because otherwise the owners had to go outside the building and pass back through security on their way back in.

This was very inconvenient, especially if they also had hand luggage as well as their pet. To make life easier for its passengers, the company that operates Terminal 4 at JFK decided to introduce this brilliant initiative.

Many governments loved this idea. In fact, there is now federal legislation that states that all airports with a capacity of over 10000 passengers have to install pet bathrooms.

According to one official, passengers on long flights often have very little time between connecting flights, and don’t have the time or the energy to go outside to let their dog do its business, and come back through security again.

This often leads to pets “accidentally” peeing in airports.

JFK airport isn’t the only one: pet bathrooms now feature in many airports across the U.S., including Dallas, Washington, Chicago, Wisconsin and Seattle.

We hope this initiative will set a precedent, so that pet bathrooms will become a common sight in airports all around the world.

It’s nice to see how more and more thought is being given to the needs of pets and their owners. As well as being really practical, this example shows that people are beginning to understand that pets really are just another member of the family.

5 Tips for Taking Your Pet on a Plane
If you have to take your pet on a plane, make sure you know all of the different requirements. You want the experience to be as stress-free as possible.  Read more »
Link copied!
Interesting Articles
Animal Protection
The Broad-Snouted Caiman: Threat and Conservation