Bark Collars: When should you use them?

Besides the fact that they don't achieve the desired result, these accessories can cause physical and mental harm to your dog. They can even go off when your dog wasn't planning to bark, from just a tickle in its throat, which is yet another reason not to use them. 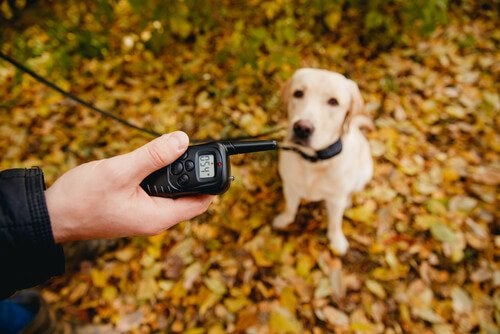 One of the most annoying habits dogs have is barking. Some people decide to use bark collars if they have a dog that does it non-stop. So, read this article to find out what they are and how they work.

What is a bark collar?

A bark collar has an electronic device inside it that turns on whenever it detects activity in a dog’s throat. The device sends it uncomfortable stimuli to stop it from barking. This usually comes in the form of electric shocks, but there are also high-pitched noises, vibrations, and sprays.

These devices are meant to punish dogs when they bark and get them to stop doing it altogether. The theory is that they’ll link the barking with the discomfort, so they’ll stop barking to avoid it.

At least, that’s the theory. However, it doesn’t take into account that there are all kinds of reasons dogs bark, and they’re not always voluntary. Barking is a form of communication that comes in many different forms. For example, barks that come that are linked to emotion are uncontrollable.

The physical consequences of bark collars

There are several different types of bark collars, but they all have a negative effect on a dog’s health. They go on their neck, one of the most delicate parts of their body. This is where dogs have important hormonal glands, like the thyroid. There are also important nerve connections in that location. Some connect directly to the spinal cord, which connects to their its brain and the rest of their body.

Most bark collars are the type that shock. They send an electrical current through a dog’s neck (and also the main nerves of the body), anytime they detect a vibration in the throat. Manufacturers claim that the current edition is too low to cause any harm, but the only reason why these collars work is because they hurt your dog, even if it’s not that much.

Any tension or pain in a dog’s neck has an impact on the rest of the body, because it goes straight to the spinal cord. Electrical shocks cause muscle contractions, cramps, nerve damage, rapid heartbeat, etc…They alter the lymphatic system, circulatory system, and can even impact a dog’s metabolism through the contact with the thyroid gland.

These collars can cause hearing problems that are as severe as tinnitus, which is extremely hard to diagnose in animals. It affects dogs’ balance, orientation, and causes intense physical pain and discomfort.

These collars send an aerosol spray right into a dog’s nostrils. Smell is their most important sense, so using aggressive things like citronella can cause a loss of smell or damage to their odoriferous glands. They also cause pain, an inability to communicate through smell, stinging, and can damage the mucous membranes in their nose (dryness or too much mucus).

Interfering with a dog’s sense of smell is one of the worst things you can ever do to them. It’s how they understand their surrounding and interact with other dogs. The sense of smell is an absolute necessity for a dog’s mental and physical well-being.

Research has proven that these collars cause constant stress in dogs. Increased stress leads to higher levels of cortisol in the blood, which then leads to bad mood, an inability to rest, irritability, and digestive issues (vomiting or having diarrhea for no apparent reason). It can also cause them to be more on edge, which auses  with it a lack of self-control and behavior problems.

The psychological effects of bark collars

Bark collars (no matter what kind), cause discomfort any time a dog is about to bark. However, they don’t know where that feeling is coming from, which confuses them.

These collars can also activate at other times: barks they don’t let out, sniffling, growling, or a remote control error. This adds yet another unknown factor for a dog — they will never figure out why this is happening.

All this just leads to fear, insecurity, and stress. Stressed dogs behave worse than relaxed ones, so these collars only create more problems than solving them. It might even create new ones: insecurity leads dogs to respond in unpredictable ways.

Aggressiveness, fear, insecurity, and problematic relationships — these are all the negative psychological effects of shock collars. They can be irreversible, or extremely difficult to treat, and might leave lifelong scars.

So, when are bark collars good to use?

Even with all the tweaks manufacturers have made (power, impermeability, remote control range), bark collars can’t distinguish between the kinds of bark. That means they’ll never work perfectly.

There are several types of barks. Some are learned — owners have taught their dogs that they can get a reward for them–and others are emotional. That means they bark out of stress, pain, joy, or some other intense emotion. Dogs can’t control them, which means they don’t do them on purpose.

Bark collars don’t work with the first kind of barks because if you don’t know why your dog is barking you won’t know whether or not to give them a reward. Your dog might be trying to get food, getting mad at the dog down the street, or just trying to get your attention.

They don’t work with the second kind, either. Your dog can’t just decide to stop barking cold turkey. You can only stop them by changing the emotion they feel. These kinds of emotional behaviors are involuntary. They are pretty much similar to humans. We won’t stop crying during tough times no matter how much we’re punished for it. We stop crying when we stop feeling sad, and it’s essentially the same with dogs.

The only way to control a dog’s barking is to figure out the root cause and remove their motivation to do it in those situations. Bark collars aren’t sophisticated enough for that, so they can’t truly solve the problem. Plus, they often cause intense, lifelong damage to your pet.