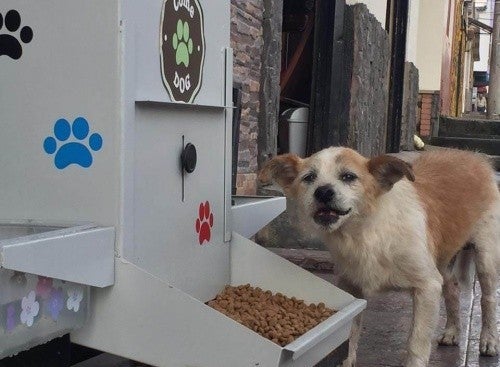 A veterinarian from Puerto Colombia is Juan Manuel Montoya. He is an expert in Zootechnics. And, he had an idea to feed and improve the quality of life in stray dogs. It is the “Comedog.”

To do this, he travelled the city. Basically, he brought food to abandoned animals. However, he was short on time to be able to reach so many animals. So, he committed himself to looking through the internet for feeders. He located one that the actress Jimena Hoyos, a dog-lover, has.

Based on the same pattern, Juan manuel met with a designer to make the feeder. “I implemented it in my neighborhood, he says. “Then I uploaded some pictures to Facebook and they got a lot of attention. People wrote me saying, ‘I’ve always wanted to make a food dispenser, but didn’t know how.’ That’s how the project became known,” says Montoya.

Now, people want to purchase the Comedog directly. First, they receive a form with information about the project. Then, they get forms to fill out. Finally, they receive the product. “I don’t sell it to companies; only foundations or people can get it. This is only because the intention is to give it to someone who truly wants to take care of it and put it to good use,” comments its creator.

How does the Dispenser Work?

The dispenser that supposed the food as the capacity to collect from 5 to 18 kilos of food and 8 liters of water, functioning by gravity. When the animals are eating, the food falls again. In Colombia there are approximately 380 dispensers that feed about 6000 dogs throughout the country.

This project isn’t based on the idea of having more food dispensers, but rather the idea of there being no more stray animals. The dogs that are fed by this type of feeder are then neutered and given up for adoption.

This project, “The Comedog,” is having such good feedback that other Ibero-American countries are also implementing it.

How did the “Comedog” Come About?

Five women started this project. They contacted each other through a social network, say options about possible collaborators with their cause, and took their first steps. The next phase of this project was contacting Juan Manuel Montoya Pardo, a young veterinarian born in Armenia that now lives in Barranquilla. He had been inspired by the idea that Jimena Hoyos had. The idea of creating a food dispenser for stray dogs was beginning to take shape.

“Although we don’t have exact figures of how many stray dogs there are in Nieva, what we do know from the environmental police is that in the sector of Leasburg Park there are a lot of stray dogs that will be the first beneficiaries of the first ‘Comedog’ in Nieva. Furthermore, the site provides protection by the national police to prevent anyone from taking or destroying part of the dispenser,” said Rosnayra Córdoba.

The dispenser, or “Comedog,” is made out of galvanized sheet to be able to support a weight of 22 kilograms. it has a sliding front door that allows putting in the food that will later be consumed by the dog. Each side of the dispenser has some structures that allow placing containers to fill with water, with each tank holding about 4 liters of water. It has a height of approximately 1.2 meters.

Actions and Benefits of “Comedogs”

There are several benefits surrounding this type of project:

For more information, they can be contacted at inflo@comedog.org or they have several social network pages:

The food of the “comedog” is donated by activists and people interested in the project. In order for them to continue to be filled with food, people can deposit coins on the top of the dispensers. With the money collected, the food is purchased every 15 days.

In neighborhood in which “comedogs” are placed, the neighbors are responsible for making sure the dispenser is full of food and hasn’t been damaged. This is a wonderful example of solidarity and social participation.

Link copied!
Interesting Articles
Help them out!
Turning Your Home into an Animal Foster Home