Mixed and Purebred Dogs: What are the Differences?

Although it's impossible to be sure what a mixed-breed dog will be like, they're usually very sweet and healthier. 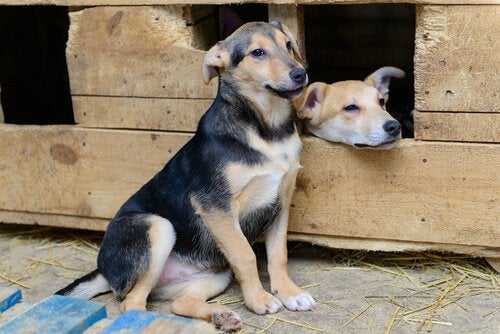 Mixed or purebred dogs, which is better? This is one of the first questions many people ask themselves before adopting. There are several important differences between mixed and purebred dogs, and the decision will come down to your own needs and goals.

The definitions of mixed and purebred dogs

Before looking into the differences between them, start by knowing their definitions.  Purebred dogs have the same physical traits and behavioral patterns as their ancestors. Their genes haven’t changed due to crossbreeding with other dogs of the same breed.

On the other hand, mixed dogs come from two different breeds mating. This usually means that humans most likely didn’t play any role in choosing their mate. So, it can be harder to know exactly what breeds a mixed-breed dog could have.

Mixed or purebred, which is better?

Deciding to adopt a dog means you should take your time in searching for the right dog. The final decision can be much harder than you might think, especially if you don’t have that much property, space, among other things.

Many people have a negative perspective on mixed-breed dogs. They associate them with strays and think they’re filthy dirtiness, but that’s not the case at all. There may be differences between the two types, but there won’t be any problem having them in the home.

So which is better? Both mixed and purebred dogs can be great companions. If you train them well, they won’t cause any problems–they’ll play and fill your house with joy. But it’s still good to understand the basic differences between the two to help you make the right choice.

The main differences between mixed and purebred dogs

Without a doubt, one of the main advantages of purebreds is that you can be almost 100% sure about their physical traits. You know how much they’ll grow, what kind of fur they have, the care they need, potential diseases, among many other things.

That’s not the case with a mixed-breed dog because you can’t know for certain what other breeds it has in it. That’s why we suggest a purebred dog if you have don’t have that much space in your home because you’ll never know how much a mixed-breed could grow.

Now, if you want is a unique dog–whether in appearance or personality–then a mixed-breed is your best option.

Mixed dogs are one-of-a-kind, there’s not a single dog out there with the exact same traits. They might have certain things in common with their ancestors, but they usually have a completely different personality.

Mixed-breed dogs are less likely to have genetic disorders than purebreds. Basically, it’s because mixed dogs have a more varied gene pool.

Purebred dogs hold onto their pure genes, which also means they transmit and develop genetic disorders. It’s also worth pointing out that mixed-dogs are usually longer-living and more immune than purebreds.

Mixed-breed dogs tend to be highly affectionate, docile, and easy to train. Purebreds too, though mixed dogs usually win in this category. But at the end of the day, personality and behavior depend a lot more on the training and affection a dog gets from its owners.

Mixed-breed dogs get better and stronger genes from each parent. That’s what makes them tougher than most purebreds. At a physical level, they’re usually much stronger than purebreds and also have less medical conditions.

Both mixed and purebred dogs are wonderful, caring, and affectionate creatures. Their behavior depends a lot on their training and the kind of affection they get, so it’s hard to say which is really better.

Although mixed-breed dogs have a lot of advantages in terms of health, the final decision will always depend on what kind of dog you’re looking for.