Can Horses Tell How We're Feeling? 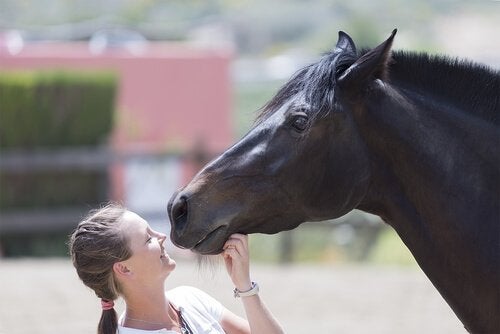 It’s difficult to find such an elegant create like the horse within the entire animal kingdom. This animal’s character is much more noble than it appears. One of the ability horses have is sensing human emotions. Could that be true?

For centuries, humans were known to be the only species with rational intelligence. That has now changed due to technological advances which have allowed veterinary science to demonstrate the sensory and cognitive abilities of animal instincts.

Since classical mythology, some animals are known for having a magical aura around them because of their sensory abilities. People who lived on the countryside already know that dogs could smell fear, and horses could sense human emotions.

With so many different hypotheses, people may still ask them-self: can science prove that horses can read human emotions or is it just a human belief projected onto the animals?

Is it possible to sense emotions?

At first, people believe many different mammals are capable of demonstrating empathy for other animals of their species. Successful studies with dolphins gave important credibility to this topic. At the same time, it paved the way for research with other species.

In the last few decades, our understanding of the empathy that dogs can have for their owners has greatly advanced. However, recent scientific studies are focusing on the social skills of horses.

It wasn’t difficult to observe that horses are capable of showing empathy with other horses, dogs, donkeys, and mules. They also understand facial expressions and certain noises in their surroundings.

This information demonstrates that equines have advance sensory abilities. However, scientist have still not found a way to discover and compare the reactions horses have when faced with several human emotions.

Is there scientific evidence supporting that horses can sense human emotions?

Currently, scientists recognize that horses are very sensitive and capable of forming emotional ties with humans. However, there’s a lot to learn before scientist actually approve that horses have the ability to sense human emotions.

The good news is that many scientific studies have already put horses on the same level of dogs when it comes to recognizing human emotions.

Among those studies is a research project conducted at the University of Sussex. It analyzed horses’ reactions to different human facial expressions.

When horses were shown friendly faces, they seemed to be sociable and calm, without having any noticeable physiological changes. However, when horses see an angry face, their heart rate increases and they turn their heads to look at the expressions with their left eye.

Facial expressions of horses and what they mean

The left eye of a mammal transmits stimuli directly to the right side of the brain. That’s where information is processed in order to cause a reaction. This explains why the horse would immediately look with its left eye once shown a more confusing expression.

In pop culture, a horse’s left eye represents an “evil eye”.  People believe that it is as an intimidation technique when the animal feels threatened. In other words, it functions as a self-defense mechanism.

Horses show apprehension through negatively changing their behavior and the way they interact. When a horse senses danger, they react by turning and/or lowering their head to look at the ground.

This type of behavior — along with the information gathered by the University of Sussex study — could prove that horses have an elevated capacity for sensing emotions.

All the examples that have been studied so far have shown similar reactions. Therefore, the results have no association with a trained animal. Horses developed this magnificent ability to survive and coexist with humans over the course of their evolution as a species.

According to the studies, the response to different human expressions is a key factor that proves horses can sense human emotions. It could also be the starting point for showing that this instinct is a form of cognitive intelligence.

Whether for scientific or cultural advancement, it’s worth paying attention to animal behavior.  If horses can sense human emotions, then they can help us develop our emotional intelligence and awareness.