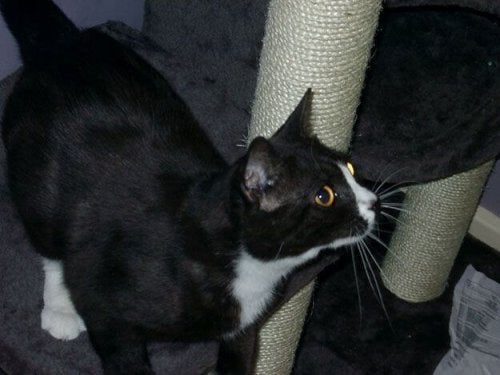 Animal lovers know how awful it is when a pet goes missing. The more time that passes, the less hope you have that you’ll find him. But you should never say never — especially about missing cats. Today we’re going to tell you the story of Moon Unit, a missing cat in London that showed up in Paris… 8 years later.

Moon Unit was living a happy life in London with her owners, Marna Gillian and Sean Purdy. But during the New Year’s Eve celebrations in 2008, she disappeared from her home. The couple thought that the cat was scared by the party for some reason, had escaped, and later hadn’t been able to find her way back.

They immediately started their search, using all means possible — Internet, posters, calls, etc. — but in vain. Marna confessed that she decided to believe that another family had adopted the missing cat, and that she was living happily somewhere else in London.

Read about the story of Moon Unit, the missing cat in London that was found, 8 years later, in the suburbs of Paris by members of an animal protection association. Happily, the cat’s microchip ID got her back home.

The good news from Paris

Moon Unit had turned into just a sweet memory for Marna and Sean. However, 8 and a half years later, an email arrived from France telling them that the cat had appeared in Paris.

Someone from the Kennel Club had found her wandering around in a train station in the suburbs of the capital. Since the missing cat had a microchip ID, they could return her to her owners.

After the initial shock and exchanging a good number of photos of the cat to make sure that she was really Moon Unit, the arduous task of returning the cat to her country began.

In the end, the people of ADAD (Association d’Aide et de Défense des animaux en détresse) issued a passport so that Moon Unit could go back home without any problems.

Sean, who at this point in the story is no longer Marna’s partner, then traveled to Paris to reunite with his cat. He welcomed Moon Unit back home. Now she happily shares her house and love with another cat they adopted after the disappearance.

As for Marna, she started crowdfunder to raise funds for ADAD as a way of giving back. In the petition, you can see the photo they used in the search next to an image of the cat in the French shelter.

Nobody can explain how exactly Moon Unit got to France. Some think that someone in England who later moved to France might have adopted her. Then she must have escaped somehow.

But we do know that it came as quite a shock when Marna and Sean got the news that their dear little black and white cat, who they had adopted from the street almost 10 years before, had been found in the outskirts of Paris.

Hopefully you never have to go through the horrible experience of having lost a pet. But if it happens, don’t lose hope. And as a precaution, it’s a good idea to get them microchip ID.