This Cat Helps His Owner Overcome Her Anxiety 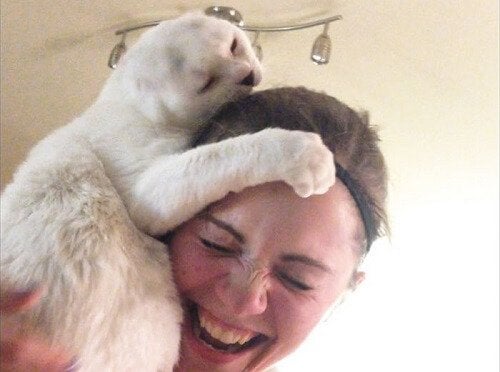 Molly is a young girl who decided to adopt an ear-less cat. What she didn’t realize is that this cat would help her more than any person. He helped her with her anxiety.

Due to being ear-less, this cat looks odd, and it was difficult for him to find a new home. Therefore, he was depressed for quite some time because he was rejected by shelter visitors. After seeing him, they would immediately move on to a different pet.

However, his life suddenly changed when a student named Molly Lichtenwalner showed up. When she saw him, she immediately knew she wanted him more than all of the others pets. Soon, her anxiety problem was about to improve.

Molly named him “Otitis“, a very meaningful name. The cat is nine and a half years old, white, and has lost his ears due to some cysts which sadly caused him to lose his hearing. His previous owners had left him at the shelter because they didn’t know how to look after an animal in this situation.

The girl said in her own words: “I have severe anxiety caused by a car accident… I decided that it was time to adopt an animal to help me with it, because cuddling with a furry friend helps a lot.”

Otitis the cat knows when she’s very stressed with her anxiety. Even he even helps her when she’s having a panic attack.

In regard to his help, Molly said: “Sometimes he’s the only one who’s able to calm me down… Adopting him is the best thing I have ever done. He is the one who definitely saved me, not the other way around.”

Lacking ears is not a problem

The outward appearance of Otitis has never been a problem to Molly. Even though he doesn’t have any ears and has a grumpy face, she still finds him to be a very affectionate and playful cat. The girl thinks the best thing she’s done so far was rescuing Otitis. She never felt so much emotional support from anyone as much as she feels from this feline.

The benefits of cats

Psychologically, cats are a great help for children, older people, in fact pretty much anyone.

The constant purring of cats can have a relaxing and calming effect on humans. In medicine, they’ve shown excellent results. They’ve been helpful in advancing cardiac disease, psychological problems or hypertension treatments. They’re also a great remedy for anxiety.

In general, it’s been shown that people who live with pets live longer and have a better quality of life. Different studies have shown that living with a cat or a dog is good for your health. Normally, a harmonious, emotional relationship between a human and animal establishes a close friendship with a pet.

The smiles come back

Some research has shown that animals put smiles back on depressed people’s face. They reduce anxiety, and stimulate socialization in people who are a bit timid. Likewise, they boost self-control in people with violent tendencies. They also help lower blood pressure in people with hypertension, and relax nervous people.

Another important benefit of having animals is their ability to accept yourself for who you are. Their love is always unconditional. They don’t differentiate between short or tall, ugly or good-looking, and the rich or poor.

A well-known study published recently in the American Journal of Cardiology found that cat owners had a significant lower risk of death during the year following a heart attack than non-cat owners.

Something else which the study showed was that petting a cat or listening to them purr caused vasodilation of the arteries and peripheral vessels, which in turn helps with relaxation.

Other psychological benefits for children

Having your child care for cats, and animals in general, can help them mature, grow, and are more aware of the most important values in life, as well as gain a sense of belonging. Feeding a cat, preparing their food, or respecting their routine encourages interest in their own diet.

But there’s more. Complying with an animal’s routine and daily needs is good for exercising younger children’s memory and concentration.

As for older people, having a cat is considered to be a natural antidepressant. Retirement can often leave a hole for older people which makes them feel as though they’re no longer useful to other people.