Why do people take their dogs to shows? What are their motives? Is it out of love for their pets, or is there something else going on? 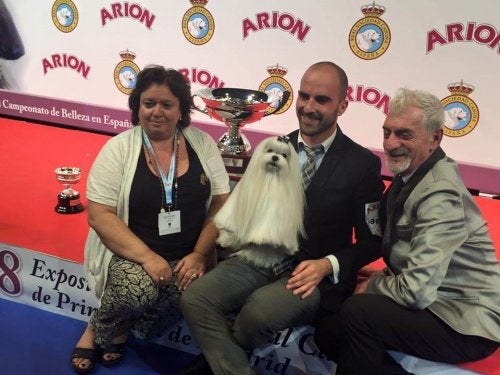 Life hands out different lots, whether we are humans or animals. Some dogs, for example, are abandoned and have to wait in a shelter for a bit of love. Others train as working dogs. Some spend their days laying on luxurious pillows. And there are also those who take part in dog shows. The latter is the case of Cinecitta Ian Somerhalder, the Bichon Maltese that won best dog out of 4,000 dogs from 200 different breeds in the Madrid Pet Fair at the 80th International Spring Exhibition in Madrid.

The contest, organized by the Royal Canine Society of Spain (R.S.C.E.), took place at the 100 × 100 Madrid Pet Fair. Cinecitta Ian Somerhalder was the undisputed winner of the ‘His Majesty The King’ trophy. The Bichon Maltese, a two-year-old male originally from Italy, came with its trainer Javier González Mendikote.

Also, Macarena Rueda, a 17-year-old teenager, won the Young Presenters Competition and will be in charge of representing the R.S.C.E. in Crufts. This is one of the most important dog shows in the world, and takes place in Birmingham (United Kingdom).

Macarena presented Hada, a female Breton Spaniel. This little dog was about to be put down at three months of age due to an illness. However, Macarena’s family came to the rescue and decided to adopt her.

Some people have pets to love them, to take care of them and to enjoy their company. Others raise dogs to take part in dog shows. Their hope is always that they’ll win a prize one day, and this is what happened with this Bichon Maltese that was proclaimed to be the best dog in Spain.

This human craze for competition

We can analyze the human obsession for competitions from different angles. Sometimes the motives are good, but other times it’s just good business. This is not the time, however, to delve into this debate.

What is clear is that neither Cinecitta Ian Somerhalder, nor Hada, nor any other animal, cares about taking part in these contests. It doesn’t make any difference to them if they win or not.

They would have probably had a much better time playing in the park fetching a ball, basking in the sun in the yard or getting themselves muddy in a puddle. But, instead, they had to spend a good part of their time getting groomed to be able to compete and, if possible, to win.

All dogs should be the best dog

A person who loves their pet surely doesn’t need judges to give their verdict on them. It shouldn’t matter if he doesn’t have all the morphological, aesthetic and behavioral requirements to be worthy of this qualification. It’s enough to love him, take care of him and enjoy his company.

But of course, whoever chooses to have a dog participate in shows may be measuring things with different parameters, regardless of the love they may have for the animal.

The point is that we must ensure that the dogs involved in these types of contests are not subject to abuse of any type.

Notes on the Royal Canine Society of Spain

The Royal Canine Society of Spain, founded in 1911, has the aim of preserving, promoting and improving pure-bred dogs with the following characteristics.

However, today they extend these purposes to all dog breeds.

In addition, it works toward the acclimatization and development of different dog breeds of foreign origin in Spain, whether for utility or show.

It would be good if they had mentioned the rights of all dogs to have a good life, regardless of whether or not they qualify to participate in the competitions that they usually organize.