Meet Turbo Roo The Little Chihuahua That Could 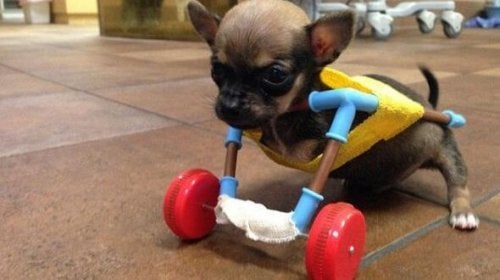 We love to tell stories like we’ll be sharing today . Although it starts off sad, it has a happy ending. Sometimes happiness does not come from having everything you want, but rather by accepting what you already have. That’s what happened with an abandoned dog named Turbo Roo.

Abandonment is absolutely cruel.  It is even much worse when someone leaves a sick animal stranded . This is the story of Turbo Roo, a very brave puppy who managed to overcome a great difficulty.

Turbo Roo is a Chihuahua born only with two hind legs; he has no front legs. Its owners, instead of being compassionate and available to give him a good quality of life, left Trubo Roos stranded because they believed the animal would bring them nothing but trouble.

Additionally, they were in the dog breeding business. A “defective” animal is not an option to make money, so it was best to abandon it. Nevertheless, Turbo Roo was lucky, since a shelter rescued the dog and began working on his rehabilitation.

This was not an easy task because of his small size, but the veterinary center was willing to offer Turbo Roo a good quality of life. Since it was impossible for the dog to stand, the vet made it a wheelchair shortly afterwards. It was a small “Chihuahua” size wheelchair that would allow the dog to walk without its front legs.

It wasn´t easy at all since the cost of making such a device is expensive. However, the veterinarian who adopted the dog launched a campaign to raise funds and pay for the treatment. This worked, and soon the owner of a prototype design company offered to make a customized wheelchair just for Turbo Roo.

Soon news of Turbo Roo’s special wheelchair became viral on social networks. The cute puppy smiles in pictures, proving he is happy, because happiness is not a goal but a path – – an attitude – – to go wherever destiny takes you.

Additionally, Turbo Roo has other handicapped friends with wheelchairs like his. He has taken fun pictures with them, posing as if they were Charlie’s Angels.
No doubt, Turbo Roo is an example of overcoming obstacles, determination, sympathy and of knowing how to appreciate life. As the saying goes, if life gives you lemons, then make lemonade!

Other dogs who never gave up

There have been other puppies  like Turbo Roo who demonstrated their desire to fight for their lives. Here are some examples: