It might be because many people try to choose a dog that seems like it has a similar personality or energy level, or because dogs have an ability to "imitate" their owners, but some people say that many dogs look like their owners. 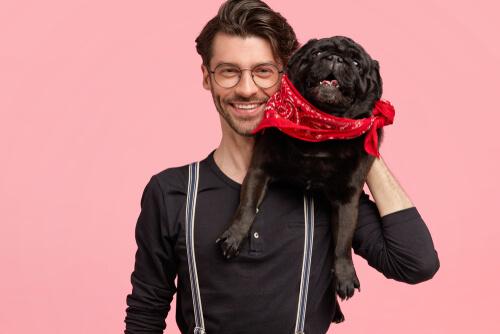 Have you ever seen someone walking down the street with their dog and thought: “they look exactly the same!” The way they walk, their style, and even their appearances are like mirror images. But do dogs really look like their owners? Read on to find out!

People who have pets at home know that our pets often have personality traits or habits that they most likely have gotten from their owners.

“They love to sunbathe,” “they don’t don’t like thunder,” “They’re a bit shy with strangers,” or “They just can’t sit still.” These are all statements people say about their dogs, but these traits can just as easily apply to humans.

If you have several dogs, you’d probably agree that they’re like their owners. Your four-legged friends can be sedentary or active, sleepy or energetic, shy or outgoing, big eaters or more reserved about food, and the list goes on…

But why? One theory says that humans instinctively choose their pets based on similarity. That’s why you so often see a restless dog with a nervous owner, or a calm owner and a relaxed pet.

That’s not something you realize when you adopt your new best friend, but there are definitely certain “tendencies” when it comes to choosing. If you’re more sedentary, and like the water, it’s more likely you’ll pick a Labrador retriever. Or, if you like doing exercise and being active, you might end up choosing a Dalmatian or a Jack Russel terrier.

The same is true with romantic partners. You’re more likely to be attracted to someone with a similar personality, or who at least likes the same things. Maybe this is why people say that dogs look like their owners in a physical, “aesthetic” sense: long or short hair, the size of their nose, head, face, etc…

Another theory says that it’s not so much that owners pick out dogs that are similar to them, but that dogs actually have the ability to imitate the people around them. Of course, they do it most with someone they see as their “leader” or alpha.

Adapting to an environment is an important part of survival. This is why dogs often seem to be similar to the person who feeds and provides them with shelters. You also have to remember that dogs see themselves as our equals, regardless of the difference in species. So, they try to imitate their owner and use them as role models.

But what happens with dogs that live with one family, then moves in with another? They’re most likely capable of changing their habits and personality based on their new owners, although some bits of their old self might linger on in their memory.

You also have to consider the habits of a specific family member or owner. If you’re active and take your dog out every day, they will probably end up “mirroring” your habits even if it’s a more sedentary breed.

Dogs aren’t the only animals that can mimic human attitudes and personalities, either. Dolphins, whales, and apes also seem to take on some of our traits when they’re around humans. Cats, on the other hand, never really do this, even when they live under the same roof with their human family.