What Is Genetic Selection in Domestic Animals?

While dogs offer us their selfless love and companionship, we breed chickens and cows for food. The function of each domestic animal is the result of genetic selection. 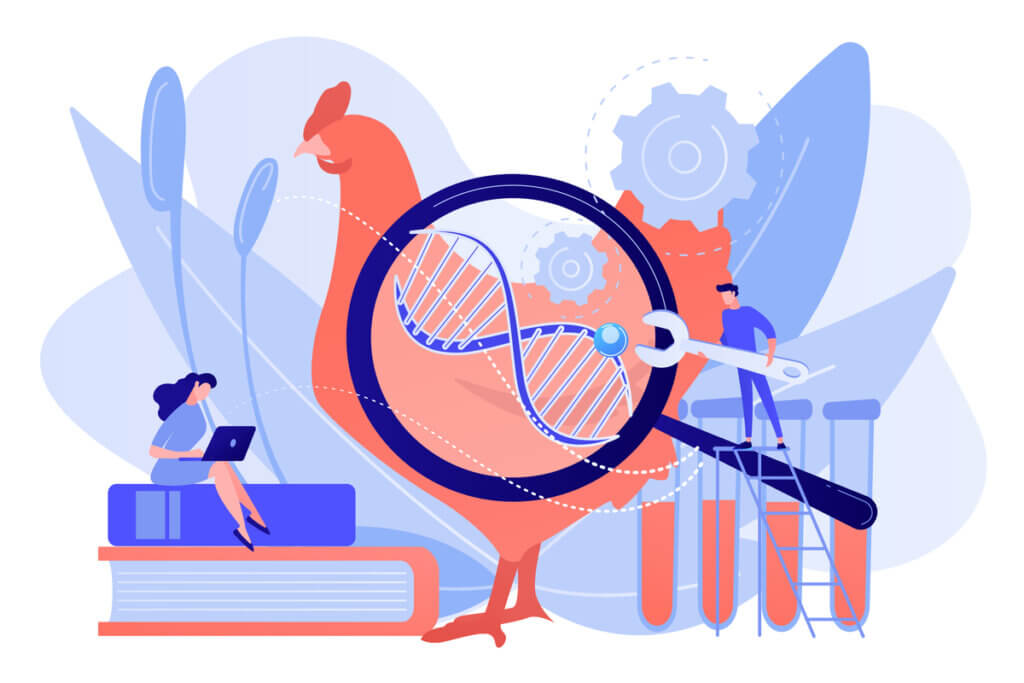 There are dog breeds to which we attribute certain traits and characteristics that make these animals unique and easily recognizable. For example, the speed of greyhounds or the intelligence of poodles. The same happens with other animals such as farm animals that are destined to cover specific needs. For example, the production of milk, meat, or eggs. All this is due to a process called genetic selection. Read on to find out what this term means and discover how it occurs in domestic animals.

In search of the best qualities

Genetic selection doesn’t only occur in dogs, but also in other domestic animals such as fish, horses, and even geckos. It’s a process that shows that there are some animals with an appearance and conduct that allow them to reproduce more frequently.

We must take into account that, like all animal characteristics, behavior is a combination of genes and the environment. At the same time, domestication is a form of genetic manipulation that humans have used for years, both in plants and in animal breeding, to shape crops and livestock to meet their needs.

Therefore, domestication is the selection of behavioral traits that improve specific animal skills. For example, in chicken farming, poultry farmers will seek out the animals that provide them with eggs, meat, and offspring. Therefore, they’ll make a selection and keep the specimens that possess these qualities. This is how we produce breeds.

So, this shows us how humans have shaped animals according to our purposes and needs since people began to domesticate.

Genetic selection has also been used to improve animal health and behavior. For example, by eliminating unwanted behaviors, such as aggression in pigs. In this way, genomic selection helps to reduce animal welfare problems.

Animals that have experienced genetic selection

Not everything boils down to chickens and mice. In fact, genetic selection is a mechanism of anthropic modification that has caused changes in many animal species. We’ll show you a few of them below.

The dog was the first species to be domesticated, making it very different today from its wild ancestor. Dog breeds present very varied morphological differences. That’s why there’s such a wide range of genetic diversity among them in comparison to other animals.

As centuries have passed, humans have selected traits to make these animals what they are today, faithful and sociable companions.

In the case of horses, humans have used and bred more and more species for competitive sports events. In a study published by the academic journal PLoS ONE, researchers chose four hot-blooded horses and they showed that the predominant genes are those that involve muscle development, growth, and fertility.

In dairy farming, gene selection is a tool that humans use to improve milk production, which breeding programs have increased up to three times.

However, we must not only focus this process on human consumption. Genetic selection also serves to provide these animals with a healthy and pathology-free life.

In 2016, Paulino Martinez, professor of genetics, showed the benefits that genetic selection offers in aquaculture. In the context of fish breeding, the application of genetic selection leads to the development of fewer diseases. Or, for example, cases of mussel cultivation that retain fewer toxic products.

Another way to favor this sector is by controlling the sex of the fish:

“When talking about the sex of the specimens, it’s important to note that in turbot and sea bass farming, obtaining females is of greater interest. That’s because they grow more. However, in tilapia farms, males are preferable”.

Leopard geckos are the most popular type of reptile pet because of how easy they are to raise and keep them in captivity. The diversity of colors and shapes in these animals is due to the number of crosses they have undergone and the action of genetic selection by breeders.

In favor of the genetic selection of domestic animals or against it?

Despite the benefits of this genetic tool, it’s just another way that people manipulate animals to meet their needs. This selection occurs not only occur in animals, but also in crops, where we combine the most desired characteristics, such as taste or color, in a single variety.

That’s why we’d like to ask readers by way of discussion whether or not you agree with this idea. After all, we’re the ones who benefit from this situation.

Natural Selection and Adaptation in the Animal World
Animals all evolve over time. In this article, we'll tell you about natural selection and adaptation - two processes that influence evolution. Read more »
Link copied!
Interesting Articles
Domestic Animals
Buffalos and Livestock: A New Symbiosis