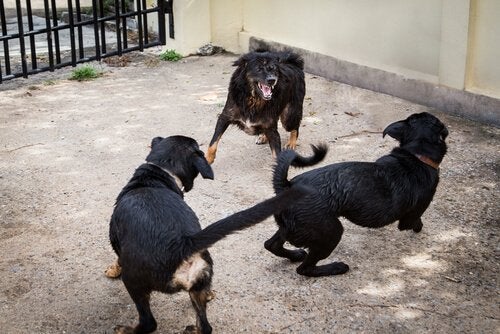 At My Animals, we will never stop raising awareness of dog fights, one of the most terrible forms of animal abuse. We can never do enough to put an end to this illegal business. So today we’d like to share the news that police have rescued 230 dogs from dog fight rings in Spain.

The rescued dogs, all considered potentially dangerous by Spanish legislation, were sent to both protective associations and official entities.

But the operation, carried out by members of the National Police and code-named “Chase,” also led to the detention of 34 people in different parts of the peninsula: Tenerife, Madrid, Murcia, and Alicante.

According to what we could confirm, the dog fight organizers planned to hold four meetings in Tenerife. Agents arrived right when the “reigning champion” was fighting. When they broke into the place, they saw two dogs fighting to death in a ring. One of the dogs was very badly injured and required immediate medical attention.

Dog fighting and other crimes

The operation uncovered a large criminal network of dog fights, drug trafficking, and money laundering, both national and international. Investigators say the perpetrators participated in fights abroad through an illegal league, RAFA.

The criminal organization was very sophisticated. For example, they used jargon on telephone conversations as code. They would use terms like:

All the fights were to the death. Hearing how they trained the dogs and how the macabre business worked is truly hair-raising. One particularly macabre detail that emerged is that the dogs went through a “baptism by fighting.” The purpose was to see if a dog (or puppy) was suitable for fighting. Needless to say, most puppies die or are later killed.

We also learned that the criminals would steal dogs for this purpose. They would use some dogs for “sparring,” or in other words to train the competing dogs for an upcoming dog fight.

But the most sinister finding was of an unspecified number of dog corpses.

Now there is the difficult task of helping the survivors  recover from this hell. It will not be easy to make them see that good-hearted people do exist in this world.

The investigation began in September 2016 after a protective association provided information on a person who participated in a Madrid dog fight ring.

During the operations, they also seized:

The detainees from Operation Chase face accusations for different crimes. Among them are:

We hope that very soon they will receive the most serious sentences for each of their crimes.