All About the Giant Armadillo

The giant armadillo is a large animal that lives throughout most of South America. It's in danger of extinction due to illegal hunting and loss of habitat. 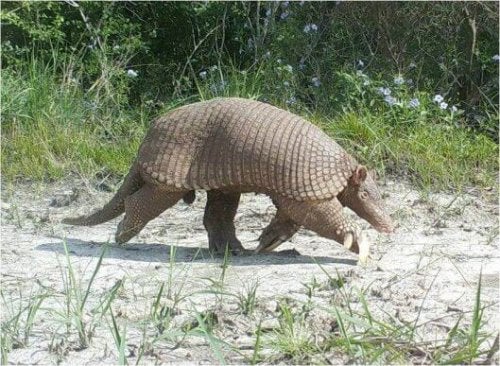 The giant armadillo is a mammal from the Cingulata order and belongs to the Dasypodidae family. Its scientific name is Priodontes Maximus.

The Priodontes Maximus is the only member of a monotypic genus endemic to South America and is currently the largest armadillo in the world. Its name refers to its strong shell, which covers a large part of its body.

Characteristics of the giant armadillo

It can weigh between 42 and 72 pounds at full size. Also, it can measure between 30 and 40 inches from its snout to the tip of its tail.

It has a small, thick head, with polygonal plates all over its back. Its ears are very spread apart, with plates of armor between them. It has a cone-shaped, flesh-colored hairless face. This animal also has about 100 teeth that all look the same.

Although its belly is naked, the rest of its body is covered by a small, flexible shell. This shell is formed by small, gray plates with yellowish tones towards the lower edges.

It’s arranged in transverse rows, which also cover its tail and legs. Additionally, it has very large strong claws that can measure up to 8 inches long, especially on its front legs.

Its tongue secretes a viscous substance that allows it to capture insects, its main source of food. It has a great sense of smell, but its other senses are not very strong. In fact, it cannot distinguish colors, but this doesn’t matter a great deal because it’s nocturnal.

Distribution and habitat of the giant armadillo

The giant armadillo lives throughout the South American continent. It extends from Colombia to northern Argentina, passing through Venezuela and the Guianas. Mainly, they live near the basin of the Amazon River.

Its favorite habitats are tropical forests, floodplains, and savannahs. Because of this, the giant armadillo is able to adapt to a wide variety of ecosystems. Experts have even found them in places 1,600 feet above sea level. Regardless of the habitat they live in, all armadillos live a large part of their lives underground in burrows that they build.

The giant armadillo’s reproduction and behavior

Their gestation period is during the summer and lasts for about four months. They only give birth to one or two babies, and they give them their breast milk for the first few months before they gradually adapt to an adult diet. Giant armadillos reach sexual maturity between 9 and 12 months of age.

The giant armadillo is nocturnal, solitary and has subterranean habits. It will usually make trips of more than three kilometers to search for food. However, despite its rigid appearance, it’s a very agile animal that can move quickly and is a great digger.

In addition to this, they can maintain their balance on their hind legs while resting on their tails. This allows them to reach high mounds of termites and to threaten predators.

Due to its large size and strong armor, it doesn’t need to hide itself completely in its shell, unlike other armadillos.

As for its diet, it mainly eats ants and colonial termites. However, it also eats arthropod larvae, worms, spiders, snakes, and carrion.

This armadillo is considered to be in danger of extinction by the International Union of Conservation of Nature. Also, it’s in Appendix I (near extinction) of the Convention on International Trade in Endangered Species of Wild Fauna and Flora (CITES).

In Venezuela, it’s in danger and they named it a protected species in 1983. They first prohibited hunting this animal in 1996 in a decree that establishes its indefinite ban.

The giant armadillo is a fragile species as it’s so scarce. Also, it has a low reproductive capacity and very specialized eating habits, due to its preferred diet of ants and colonial termites. Their overall population is unknown, but experts estimate there are six individuals per 100 square kilometers.

In addition to a loss of habitat, humans who hunt them for their meat are also a threat. Since armadillos are highly valued as a protein source, they are aggressively hunted. This has resulted in the extermination of a large percentage of the population.

Also, another threat is illegal hunting for clandestine sale to collectors, but this is difficult to quantify. In addition, some Amazonian indigenous people use their hooves to make ornaments.

The Solenodon, a Living Fossil
The solenodon is a species that hasn't changed much in the last 60 million years. It's also one of the few poisonous mammals that exists on the planet.  Read more »
Link copied!
Interesting Articles
Wild Animals
5 Species in Critical Danger of Extinction