Despite their large size, this feline has the ability to be incredibly stealthy. They can follow their prey for hours until they eventually attack. 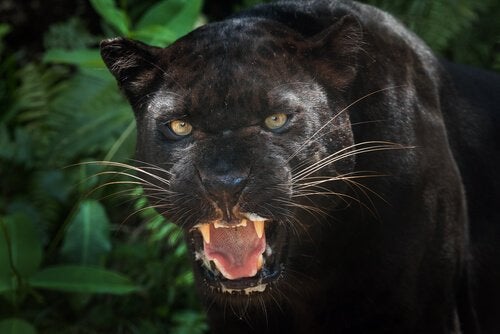 Black panthers are mysterious and beautiful animals that awaken everyone’s curiosity as well as their fear. Continue reading to take a closer look at this incredible animal and let us tell you everything you want to know. Are you curious yet?

The most curious things about Black panthers

Even though you might be frightened by panthers, keep in mind that they themselves are easily frightened. Therefore, as soon as they feel a threat or another predator pursue them, they hide in trees.  As you can see, these animals have an impressive ability to climb.

Even considering other ferocious cats, the black panther’s jaw has no competition. Experts say that it is capable of chewing its prey, bones, and even brain. Impressive!

They say what a mother will do for her child knows no limits. This is true for black panthers as well. In spite of being easily frightened and fleeing from threats, if a threat tries to attack their young, a mother panther will take out her claws and won’t stop swiping until her opponent dies or flees.

These are undeniably big cats. However, their ability to follow their prey stealthily and silently is amazing. They will sometimes stalk prey for several hours, gradually approaching them, entirely unnoticed. By the time the prey notices, it’s too late.

When it comes to wolves, they eat non-stop because they never know when they will have another opportunity to eat. However, black panthers are quite different regarding this behavior. They hunt an animal, eat what they think they need, and then bury what’s left. Then, they come back later for their next portion.

Once they have buried their prey, they spend hours licking themselves to get rid of the odor, even if they don’t smell that much. They do this so other animals won’t be able to find where they have hidden their food, follow their trail, and steal it. This way they are guaranteed to have their next meal.

They are big cats

The black panther is the largest feline in America. After lions and tigers, they are the third largest in the world. They can measure up to 1.5 meters long, up to 65 centimeters wide, and weigh up to 90 kilos.

Black panthers are nocturnal animals, so all activity, hunting, and eating take place during the night. The color of their fur also helps them go unnoticed by prey and predators.

They spend their days hidden in trees waiting for night to fall. They have adapted into adept climbers and are able to hide in branches comfortably.

Although in some cultures people believe that black panthers are dangerous animals, this isn’t true. Panthers only attack if they feel threatened, so if you leave them alone, they will leave you alone.

Now, it’s true that poaching has made them very fearful of humans. Therefore, they may defend themselves against possible attacks, just as any animal would.

They are very adaptable

Although they live in the tropical jungle, black panthers are very adaptable. They are able to live in several places with different climates, from leafy forests to deserts.

What do you think about this close look at this beautiful and impressive animal? Surely, these interesting facts have helped change your perspective about this feline.

Animals
Why You Shouldn't Have a Raccoon as a Pet

Adopting pets that are less “conventional” than a dog or a cat is trendy. Many people are embarking on the…