Although the slow loris is of calm temperament, its method of defense is to remain still. It also protects itself by secreting a toxin through its poisonous glands. 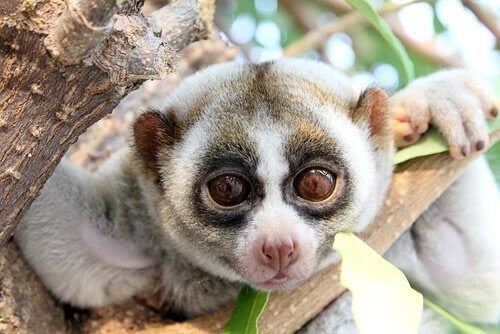 The slow loris is a little-known species that belongs to the primate family. Sadly though, the illegal trafficking of this animal has increased considerably over the past few years. Get ready to meet one of the most curious animals on the planet!

Characteristics of the slow loris

Lazy loris, also known as slow loris, are a type of primate which lives mainly in southeast Asia. They populate countries such as India, Bangladesh, the Philippines and the island of Java.

There are several species of lazy loris –although eight different species stand out. They are relatives of other known primates such as pottos, galagos, and slender loris, but little is known about their evolutionary history. Slow loris can easily be confused with other mammals like sloths. They don’t resemble classic monkeys; their rounded head and small snout with large eyes are more reminiscent of small nocturnal bears.

Depending on the species, these animals have different color patterns. They have a long trunk, and hands and feet they can grip things firmly with. This allows them to hold tightly onto trees.

Behavior of the slow loris

Interestingly, slow loris have a skill they don’t share with other animals: they are the only mammals with poisonous glands in their arms.

Consequently, when these primates feel threatened, they lick their glands to process the toxins as they pass into their mouths. The toxins become active when mixed with the saliva. Slow loris either spread these toxins by biting predators, or humans, or by licking their young in order to protect them.

Slow loris are fairly quiet animals. In spite of their poisonous glands, they only attack when cornered. Normally, its defense strategy is to remain immobile in the branches they live in. Their greatest enemies are snakes, eagles and, in some cases, orangutans, although civets do prey on them occasionally.

It’s a shy animal, and it’s hard to know much about its behavior. Its social structure is unknown, but they are quite solitary animals. The slow loris communication occurs through olfactory marking, just how males mark their territory.

Like other primates, slow loris are entirely dependent on their parents and create a strong bond with them. The loris are omnivorous animals and don’t discern between eating fruit or rubber. They also hunt small animals.

Slow loris: in danger of extinction

Several species of slow loris are in danger of extinction. Five out of the eight valid species are either vulnerable or in danger, according to the Red List of the IUCN. In China they could disappear completely if we’re not careful.

The main threat to these animals is the fragmentation of their habitat, due to problematic issues such as the production of palm oil, but they’re also one of the animals endangered by practices in oriental medicine. Poaching is also one of the causes of their disappearance, and it’s even becoming fashionable to use them in touristic activities, similarly to what happens when people take selfies with the slow loris.