Wildlife Of The Galapagos Islands 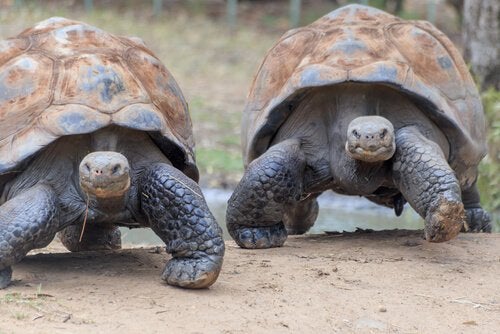 What are the Galapagos Islands?

The Galapagos Islands are a collection of islands in the Pacific Ocean, over 600 miles off the coast of Ecuador. Administratively, they belong to Ecuador, which is responsible for protecting and conserving the life on the islands.

The Galapagos Islands are an archipelago made up of 19 differently sized islands and more than 200 smaller islets and rocks. There are people who live there all year round, some 25,000 people per the last census, but the islands also receive almost 200,000 tourists every year.

Wildlife of the Galapagos Islands: Tortoises

When talking about the wildlife of the Galapagos Islands, your mind may naturally jump to tortoises and reptiles. The Galapagos Tortoise (seen at the top of this article) is a species of giant tortoise that lives on the islands.

The species is actually made up of 14 different subspecies, four of which are now extinct. Lonesome George is sadly a famous example. He was the only one left of his species, living on the islands until his death at almost 100 years old.

But they’re not all land tortoises. There are also turtles too. The Galapagos Green Turtle is a subspecies of the Green Turtle and lives in the waters of the Pacific Ocean, though it returns to the islands to lay its eggs.

Other unique reptiles and iguanas

Another example of the unique wildlife of the Galapagos Islands is the marine iguana. It’s the only lizard existing that feeds in the ocean; its diet consists of seaweed. However, only the bigger males can swim. The females and children paddle and look for food when the tide is low.

The largest ones measure over three feet long and weigh over 30 pounds. Because of their diet, they consume too much salt. To get rid of it, they expel salt crystals through their nasal gland.

When they’re not looking for food, their behavior is very similar to other lizards and iguanas. They lie in the sun to warm themselves up. Their skin is black to capture the heat more quickly and easily than other lizards.

Birds: the Galapagos islands have more than just aquatic animals!

Most of the native species on the Galapagos Islands are actually birds — and there is a huge variety of them. There are penguins, finches, cormorants, gulls, owls, pelicans…

The Galapagos penguin is the only penguin that lives north of the Equator. They’re one of the smallest penguins, too, weighing just five and a half pounds. They’re black with a white belly.

This extraordinary spot on the plant is home to 13 different species of finches. The most well-known is the Vampire Ground Finch, which gets its name from its strange diet: it feeds on the blood of other birds. All of these species are physically similar except for their beaks. Their beaks vary in shape and size depending on their food source.

The Flightless Cormorant is the only member of the species that has lost its ability to fly. Like all other cormorants, they dive to catch fish. They’re good swimmers, but their wings are too small for flying, so they use them for swimming instead.

An owl species also lives on Galapagos Islands. Unlike many of the other birds on the archipelago, the owl doesn’t depend on the sea for food. It mainly hunts other birds, including bigger birds. Also, unlike birds on the continent, they hunt during the day instead of the nighttime.

The wildlife of the Galapagos Islands includes many different lizard species. Lava lizards are the smallest ones that inhabit the islands. They measure up to nearly 10 inches long, but the males are almost three times bigger than the females.

Lava lizards eat insects, and both their behavior and habitat are very similar to other lizard species. They live mainly on the plains, but also in areas with vegetation where they can easily hide. However, they need to be able to lie in the sun to increase their body temperature.

The Galapagos Islands, because they’ve been so isolated for thousands of years, contain some of the most unique animal life on the planet. Recently, thanks to conservation efforts and protective measures, they are now a reserve and refuge for hundreds of species of animals.