The Mountain Gorilla Population Has Increased To 1,000

Unlike other primate species that are also in danger of extinction, the mountain gorilla population has doubled over the past 30 years, despite illegal hunting, the destruction of their habitat, and wars. 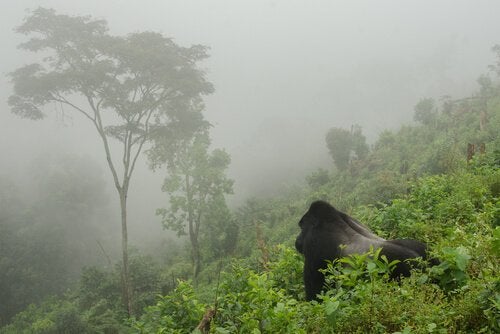 The oldest national park in Africa and its inhabitants have some great news. The mountain gorilla population has increased to 1,000. Yes, these are same gorillas that stared in Gorillas in the Mist.

The mountain gorilla, an exception among primates

This is great news: the mountain gorilla population (Gorilla beringei beringei) has doubled in the past 30 years, and it’s only getting stronger.

Last year a group of 31 primatologists conducted a study revealing a terrible reality for primates that was caused by one of their closest relatives: humans. They found that 60% of primates in the world are at risk of extinction. These studies also found that 3/4 of all primate populations are dropping at an alarming rate.

But that’s not the case with the mountain gorilla. Even though they are still at risk of extinction, their numbers are icreasing. However, people con say the same thing about the rest of the primates on Earth. Species like the macaque in Gibraltar are threatened by illegal trafficking, and global warming is wiping with others species suchas as the baboon.

Dian Fossey, a legendary naturalist who gave her life for these gorillas, would be proud. The mountain gorilla population is on the rise, despite the illegal hunting she fought so hard against. They’re also withstanding the wars and habitat destruction around them–it’s truly amazing.

Their study also showed that there are still 100% wild gorillas in Virunga National Park. Nearly 200 gorillas aren’t used to human contact (which is a good thing). A lot of these conservation efforts have succeeded simply because gorillas are unique animals that have a fascinating history.

After the death of Dian Fossey, Virunga National Park opened up to tourists. Thousands of people visit the park every year.  People gather in small groups just to see the gorillas while making sure the gorillas don’t get used to human contact.

A group of ambulatory “gorilla doctors” (veterinarians) also run daily analyses on the gorillas. This makes it possible for them to treat gorillas in the wild.

How do we know how many are left?

According to the study, a group of conservationists covered an area of over 2,000 kilometers (1,250 miles) in Virunga National Park. They looked for feces, prints, and fur. They checked the DNA samples to rule out whether they were looking at the same gorilla or several of them.

The researchers counted the Virunga population at around 600 gorillas split them between 41 groups. Then, there are the more than 400 that live in Bwindi Impenetrable Forest in Uganda.

Genetic analysis has made it possible to fun a much more accurate census than the one from 2010. It has also made it easier to figure out the social dynamics of these animals.

But Virunga National Park is still a dangerous place for both gorillas and people. Along with the kidnapping of 2 British tourists, 6 guards died protecting these gorillas just a few months ago. This has led the park to close its doors to tourism until 2019.

They’re trying to strengthen their security protocols because they need the revenues from tourism to maintain the park and its gorillas. Thanks to Dian Fossey and tourism, celebrities like Ellen DeGeneres have donated money to the park. This will hopefully guarantee them even more protection because the lives of animal highly cherished in Virunga.