What To Do If You Find A Litter Of Kittens On The Street?

First, you have to wait until their mother appears. While they’re still in the breastfeeding phase, she’s the ideal figure to take care of them. If she doesn’t appear, and they’ve clearly been abandoned, you can take them home and take care of them. Of course, shelters are always an option too, and will help you find them a home. 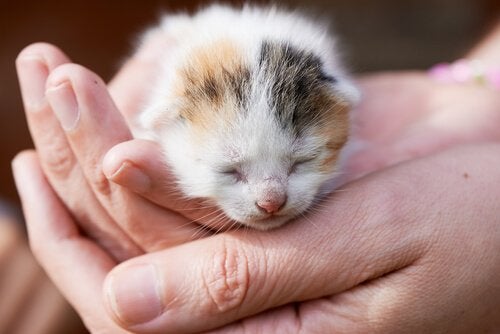 Newborn animals are always extremely vulnerable. That’s why knowing what to do when finding a litter of kittens on the street will give them a second chance in life and help them become loving house cats.

Although female cats can get pregnant during any time of the year, they mostly get in heat at the beginning of spring and fall. Most cats give birth during the first four months of the year.

So, during the months of March and May, you can find thousands of kittens on the street of towns and cities. The TNR project is trying to reduce the reproduction rates, but their efforts are not enough because there are too many people who are still abandoning cats.

That’s why it’s so important to know what to do if you ever come across a litter of kittens on the street. However, prevention is even more important. Spaying or neutering your cat, whether it’s an indoor or not is the responsible thing to do. If your cat goes out for a few minutes or gets lost for a few hours, it could end up getting pregnant or impregnating other female cats.

One thing you can do to help is to work or volunteer for shelters involved in the TNR program (trap, neuter, and return) or you can make a similar proposal to your local city hall.

Wait for the litter’s mother to appear

If you don’t sterilize all the cats in one colony, they’ll just keep on reproducing. So if you find a litter of kittens on the street, your first step is to wait for the mother to appear. Life as a stray is tough, but they need their mother while they’re still nursing.

Watch the cats for 2-3 hours, because mothers generally go out a few times a day to hunt and go to the bathroom. Give the mother some distance by hiding or staying a few yards away, because she won’t approach the litter is she sees you.

Kittens have to eat every 3-4 hours, so it’s unlikely their mother will be gone any longer than that. This means that if she hasn’t come back after several hours, and if the kittens start calling out for her and she still hasn’t shown up, then most likely the kittens are orphans that need your help.

They obviously have been abandoned if they are in a crate with blankets, so there’s no need to wait for the mother. There are still shameless people in the world who are willing to separate kittens from their mother.

Caring for newborn kittens in your home

The first thing to do when you’ve taken a litter of kittens from the street is to provide warmth. They can’t regulate their body temperature at such a young age, and they’re probably very cold. Before you feed them, start by giving them some blankets and a hot-water bottle.

Newborn kittens actually aren’t too high maintenance. They don’t normally play or walk around during the first weeks of life, so the main thing you need to do is to give them cat’s milk (never cow’s!), help them go to the bathroom, and provide warmth and a place to sleep.

Weigh them at least once a day to make sure they’re fattening up and growing. Pay close attention to their appetite and feces because these are both important health indicators.

Once they’re stable, you should take them to a vet. Along with telling you whether or not they’re healthy, the vet will help you figure out their exact age, de-worm them, and answer any questions you might have.

Get in touch with a shelter

You can also contact a shelter. They’re used to raising newborn kittens, and can even help you financially with milk for kittens, vet appointments, or any other related expenses.

Also, once the kittens have started eating solid food and are ready to become independent, a shelter can help you find them a family that won’t abandon them all over again.

A litter of kittens can’t survive on the streets without their mother. By putting in a few weeks of effort, you’ll be helping them become independent adults ready to live happily ever after with a permanent family.