How to Change Your Cat's Diet

If you don’t know how to do it properly, changing your cat's diet can be a real challenge. 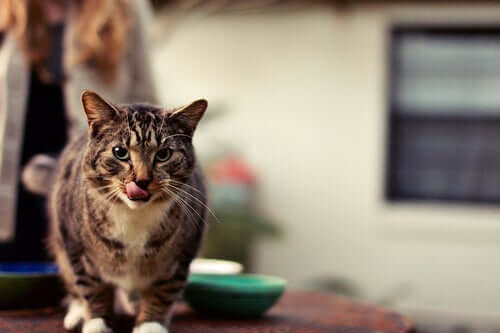 Here are some practical tips to help you diversify or adapt your cat’s diet without harming their health.

The ‘selective’ palate of domestic cats

It isn’t uncommon to hear that some domestic cats can be quite picky when it comes to food. If they didn’t have a keen sense of taste it would be very difficult to try to change their diet, but what’s the truth and what are the myths?

Wild cats are carnivorous animals with very independent characters. Their bodies evolved to perfect their hunting skills, allowing them to position themselves at the top of the food chain.

The diet of these wild animals doesn’t just depend on their evolutionary capacities. Their nutrition also varies according to climatic change, the availability of food in their environment, and human intervention, etc.

Imagine what would happen if a wild cat developed certain unpredictable habits that domestic cats have. These selective behaviors would put the survival of their species at risk.

If cats aren’t ‘unpredictable’, how do you explain the fact that many domestic cats have such a unique palate? The answer lies in the question itself. Cats developed certain selective feeding behaviors through the process of domestication.

It all starts when the cat no longer needs to hunt for the food itself and adapts to eating balanced food. They’ve also grown up in smaller environments, meaning they haven’t experienced the changes that happen in a wild environment. This then makes their bodies become used to a very limited dietary routine, which makes them feel more secure.

To better understand this phenomenon of home life adaptation, we can look at alley cats.  These animals experience something similar to wild cats, as their survival depends directly on their ability to adapt.

One consequence of the lifestyle of an alley cat is that their food is often more varied, and their palate much less selective than that of a domestic cat.

Changing your cat’s diet – the importance of early adaptation

Felines define the criteria – or preferences – of their palate during their first six or seven months of life. During kitten-hood, they’re more willing to try new flavors, aromas, textures, and degrees of moisture. This is the perfect age to get them used to a varied diet and to prevent them from refusing to change their food.

If we wait too long to get our cats, who already have a defined palate, to try new foods, then it will take them much longer to get used to it. An adult animal is less flexible to changes in their routine and often refuses unknown flavors.

If we offer our pet a range of different smells, textures, shapes, and flavors at a young age, it will grow to be more tolerant of different food. Therefore, early adaptation is the best preparation for changing your cat’s diet during adulthood.

As we said, cats stick to their routine to feel more secure. Exposing them to radical changes in the environment, food, or habits often causes negative reactions in their bodies and mental health.

If the change is drastic, they may develop aggressive behavior and/or self-defense, behavioral changes, and various symptoms such as lethargy, diarrhea, malnutrition, etc.

It’s vital to change your cat’s diet slowly and gradually, and to avoid behavioral and organic disturbances. Ideally, you should start by replacing a small percentage (5%-10%) of their old food with new food in their daily diet; and increase this percentage weekly.

A good idea is to “disguise” the food changes by adding pâté or wet food. The strong aroma and pleasant taste of these will help stimulate your cat’s appetite.

Although effective, it’s important to only use this ‘technique’ during the first few weeks, so that the animal doesn’t expect them daily.

But you need to pay close attention when changing the diet of an adult or older cat that has always eaten the same food. Their body will have adapted to digest and absorb the nutrients offered by the formula of that food, so changing their diet radically can cause damage.

Whatever you decide to do, always consult a vet before changing your cat’s diet. They need to be healthy to cope positively with the changes. Your vet will also be able to help you choose a new food that meets your pet’s nutritional needs.

Caring for Your Sick Cat: Diet and Nutrition
Every cat needs a diet that's tailored to its needs. This is especially true when it comes to caring for a sick cat with special dietary requirements. Read more »
Link copied!
Interesting Articles
Homemade Recipes
A Good Meat Stew for Your Cat

Cats
How to Feed a Pregnant Cat

The diet of a pregnant cat is decisive for the healthy fetal development of its kittens. In fact, it’s very important to feed a pregnant cat properly to avoid putting…

Cats
Starting a Diet for Cats

Throughout the different stages of a pet's life, the owner may need to adjust its diet according to specific different nutritional and energy requirements. A kitten, a senior cat, or…

Cats have a sweet tooth just like dogs, but perhaps they show it a little less. However, sugar is dangerous…

Cats
What To Do If Your Cat Stops Eating

People often joke that cats are picky eaters. However, if a cat stops eating, there can be serious problems that…

Unlike common cat food, wet food for cats contains much more water. Therefore, it contributes – to a greater extent…