Is it healthy for dogs to eat pickled foods? Pickles are low in calories, they contain vitamins and minerals that make them a relatively healthy option for your snacks. However, they're not an excellent choice for feeding your dog. 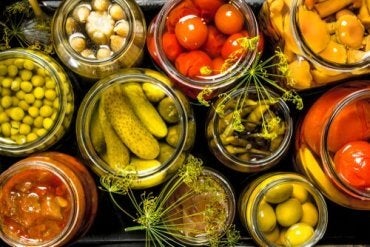 Is it advisable for your dogs to eat pickled foods? Being crunchy, salty, and sour, pickles are the perfect add-on for hamburgers, hot dogs and sandwiches. Have you ever wondered whether it’s safe to share your pickles with your dogs though? Well, the news we have for you is that vets actually don’t recommend it.

Dogs, being omnivores, will eat almost anything you offer them. But not all human foods are safe for a dog’s digestive system. Pickles are one of those foods that are on the risk list. Find out why below.

What are pickled foods?

Pickles are vegetables that have been preserved in salted water, brine, vinegar, and other spices, hence they are high in sodium.

This food provides a variety of flavors, some spicier than others, and may contain ingredients that are toxic or unhealthy for a dog.

Typically, pickles are vegetables soaked in a saline solution, consisting of vinegar and various other spices.

Since there is no standard recipe for its preparation, whether or not your dogs can eat pickles depends on knowing what’s in them.

The idea that the herbs added in pickles provide antioxidants may lead to the belief that it may be healthy for dogs to eat pickled foods. However, if you want to provide your dog with the benefits found in herbs, you can add the herbs directly to your dog’s food instead.

Ingredients that make it dangerous for dogs to eat pickles

Some pickles contain – in addition to other vegetables – brine, onions, garlic, sugar, and spices. You should know that garlic and onions are toxic to dogs and cause damage to their red blood cells, leading to anemia. Although pickles may not have enough garlic or onions to cause a problem, it’s always best to avoid them.

In the case of spicy pickles, they can be very irritating for a dog’s stomach. In addition, they can also produce gastrointestinal distress, including vomiting and diarrhea.

The salt of life (and death)

In addition to spices, high sodium content can be especially problematic for dogs. There’s no question that ingesting a large amount of sodium in a short period of time can cause side effects such as vomiting, diarrhea, ataxia (loss of balance), and even seizures. In severe cases, excess sodium can cause death.

Your dog won’t be at risk if he accidentally eats any pickles, but including them regularly as a reward in your dog’s diet can prove to be very dangerous.

It’s important to note that the ideal dog diet isn’t sodium-free, as it’s an important nutrient in a dog’s diet. Thus, their diet requires a small amount for normal bodily functions and if sodium levels drop too low, it can be dangerous to their health.

In regard to sodium intake for dogs, moderation is the key. Especially in commercial dry foods, it’s recommended that they contain at least 0.3% sodium. This allows good maintenance, growth, and a normal development.

Since sodium is already part of your dog’s daily diet, it’s not recommended to provide additional foods that raise salt levels, such as pickles. In addition, dogs with a heart condition or sodium-related health problem should never eat pickles.

You should always thoroughly research any food you want to give your dog. Many foods that are good for humans are toxic to dogs, so be careful. Moreover, talk to your vet, he or she can help you out when you’re unsure!

Food Poisoning – Symptoms in Dogs
Food poisoning is one of the most common problems in veterinarian clinics. Usually due to an animal's exposure to spoiled or contaminated food. Read more »
Link copied! Next
Interesting Articles
Dogs
Calorie Counts in Pet Food

Making your dog happy seems very simple. They're happy with anything we give them, no matter how small. They don't…

Commercial dog foods undergo rigorous chemical and biological tests. The purpose of these tests is to assure that foods don't…