A plumed basilisk is an animal so impressive in its appearance that it's the inspiration for innumerable stories and fables in the human local folklore tradition. However, this lizard is more than a myth or an enigma. 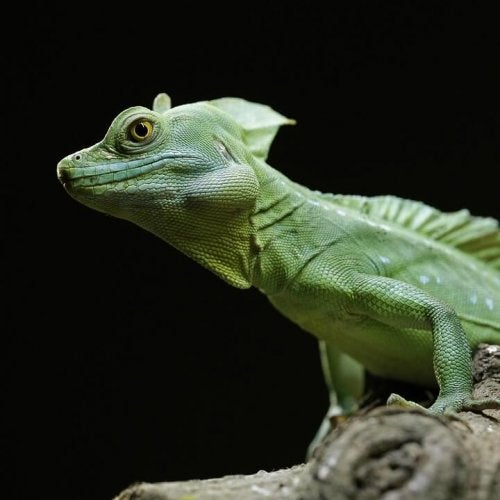 The penetrating yellow eyes that stand out from within its emerald-green leathery skin make the plumed basilisk a feared and revered creature. This reptile is undoubtedly one of the natural enigmas of the rainforest. In today’s article, we’d like to tell you about this lizard together with its characteristics and diet.

The anatomy of a plumed basilisk reminds us of a dragon. The beauty of this animal definitely contributes to the legend of a fictional reptilian beast. It has its name, after all.

The most widespread myth around this beast is that one simple look at them could turn a person into stone. However, they’re well respected today and have been throughout the centuries. Even in this era, there are some native tribes who believe that plumed basilisks are magical creatures.

The green or double-crested basilisk (Basiliscus plumifrons), gets its name from the Greek word basilískos, which means “little king”, because of its head ornament, which is quite similar to a crown. This lizard species is undoubtedly the most beautiful of the four recognized in the Basiliscus genus.

Its colors are intense shades of electric green, and it typically has white, yellow or blue scattered specks. The Basiliscus plumifrons male is often dressed up with a pair of high cranial crests and vertebral sails that run along the length of their body and tail. They’re a most striking creature.

The female is much less impressive in shape and has a smaller cranial crest. She’s smaller in size than the male. This animal’s adult size is of about 24 to 30 inches. That’s about two-thirds the length of their tail.

Basilisks are quite agile and equipped with long phalanges that end in sharp claws. This feature allows them to climb trees fast. The back ones are lined up with small scales that face downwards. This basically increases the surface area of ​​their “toe” against the surface of the water, and helps them to walk on water.

The ability to walk and run across the surface of the water is one of the most notable features of a plumed basilisk. However, it’s also present in species of convergent evolution. For example, Old World sailfin lizards of the genus Hydrosaurus. Due to this ability, we know them in English as the Jesus Christ lizard.

The Basiliscus genus is mainly present in Central America –from southern Mexico to northern South America. The double-crested basilisk mainly inhabits the area from Guatemala to Costa Rica.

Commonly, one can see them along large waterways and inlets surrounded by lush and dense forests. It’s in these areas where their population is largest. However, you may find them in a treetop at a height of about 50 feet. This is because the basilisk is typically too exposed near the water when it comes to hunting or escaping any approaching danger.

When it comes to reproducing, pregnant females prepare a shallow ditch where they lay up to 20 eggs. The mother just leaves the eggs and the young are born with the ability to run, climb, and swim.

The wildlife diet of a plumed basilisk

A wide variety of foods makes it to the stomachs of wild basilisks. Their diet consists of fish, frogs, birds and even other lizards. It also includes invertebrates, such as shrimp, ants, beetles, flies, grasshoppers, lobsters, crickets and crayfish.

As for plants in their wild diet, basilisks mainly eat seeds, fruits, berries, and leaves. Because of this, one can say that green basilisks are omnivorous.

When in captivity, a basilisk mainly eats live insects. These insects are high in protein and form  the core of their diet. They’re also relatively easy to digest. Brown crickets are the ones they seem to like the most, but you can also feed them black crickets, Dubia roaches, and grasshoppers.

If you care to vary their diet a little, then you can feed them other insects of the calciform species. For example, flour worms, wax worms, and dehydrated fly larvae.

It’s important that you spray their tank with water every morning. Not only to provide hydration but to also try to simulate a tropical environment. You can also add a water container as a source of drinking water.

To provide optimal nutrition and maintain your basilisk in top shape then add some dietary supplements. They can be in the form of calcium, vitamins, and minerals and are commonly available as powders.

You should supplement a basilisk’s daily diet with calcium. Sprinkle it directly on the food. You can also add vitamins to the daily diet of young basilisks. But, keep in mind that adults will only need them every two days.

Any “live food” you feed to a basilisk should also be “loaded” with food for insects. Basically, this means you have to feed those live foods a nutrient-rich diet before feeding them to your basilisk. Some live food suppliers already offer loaded options.

Iguanas Lack Calcium and Vitamins
Because of their unbalanced diet and lack of contact with sunlight, iguanas lack calcium and vitamins, and we'll show you how to care for them. Read more »
Link copied!
Interesting Articles
Exotic Pets
Keeping a Crested Gecko as a Pet

A parrot diet is one of the few things you can control to keep yours healthy. However, you must really…

Adoption
What Pets Don't Cause Allergies

You’ve finally decided to adopt a pet, but you have family members who have allergies. And, this is making your…

Animals
Breeding Snails: What You Need To Know To Do It At Home

Whether you like snails or you're looking into eating or selling them, there are steps you can follow to breed…

Animals
6 Exotic Invasive Species You Should Know About

These exotic invasive species cause imbalances in the environment. They also can cause other animals or endangered species to disappear.…