In this article, learn all about Andrés Carrión, a Colombian aggressive dog trainer. 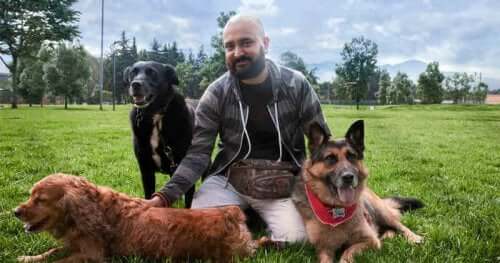 He’s Colombian and willing to rescue all the aggressive dogs from the capital. His name is Andrés Carrión, a dog trainer, and his experience, techniques, and conditioning method have been very successful in the art of dog training. He’s passionate about his work and motivated by his love for dogs.

Andrés starts his days at half past five, when he takes a long walk with his “pack”, a group of dogs entrusted to Carrión for their care and training. Few things are left to chance. This trainer has a well thought out plan for each case, particularly when it comes to aggressive dogs.

He knows how to stop a dog from showing its teeth to anyone. It’s a revolutionary method, which consists of tailored work aimed at each dog individually, but always through direct interaction with a group of several dogs of different ages. Perhaps this is the secret ingredient to his success.

More than a trainer, Andrew seems to be an excellent dog socializer. The walks allow the dogs to get used to the company of their own kin. They’re a sort of group therapy in which all the dogs interact through programmed coexistence.

Before he begins, the first thing this Colombian trainer does is talk to the dog owner in order to get an idea of what may be going on. Then, a direct interaction exercise between the animal and the trainer begins in order to give a more accurate diagnosis.

He has seen very possible results in aggressive dogs from the first two weeks of training.

The main strategies Andrés Carrión resorts to are shock therapy and positive reinforcement. With the first, the dogs manage to socially integrate with others. On the other hand, with the second, he rewards positive behavior. However, he does this very carefully because not all dogs have the same level of aggressiveness.

Proven experience as a dog trainer

Andrés carries out his activities through his company LifeXperience Dogs. Before that, he was a business administration professional. However, his love for animals led him to decide to help dogs rehabilitate both physically and psychologically. Thus, he decided to learn from dog training experts at the Colombian Red Cross.

Since his decision to change career paths, he visits the Simón Bolívar Metropolitan Park often to take long walks of up to three hours.

The psychology of aggressive dogs

Andrés considers that dogs that have been trained to attack and stray dogs who have suffered abuse are influenced by internalized patterns that are maintained and strengthened over the years. These cases represent a challenge because the negative socialization process must be eradicated and the dog must be retrained.

People’s attitudes towards aggressive dogs can make things worse. Some choose to discipline them with more violence and others respond with fear. The worst thing is that both reactions tend to promote aggressive behavior. In that sense, the lack of tolerance can be considered a factory of uncontrollable dogs.

The good news is that this Colombian dog trainer is sure that even the most violent dogs can learn to control their reactions with the proper stimulus. It’s all about teaching them to socialize, rewarding them for good behavior, and establish ourselves as the unequivocal leaders of our faithful furry friends.

Some tips to train aggressive dogs

The main thing is to understand that you can’t isolate your dog because it’s aggressive. On the contrary, the right thing to do is to promote interaction with other dogs in a controlled manner. At first, you must keep them on a leash and make them approach other dogs progressively.

As the owner, you must take a firm stance when your dog is aggressive. On the other hand, whenever the dog shows positive and peaceful interactions, it should be rewarded with a piece of meat or a treat. The experts at LifeXperience Dogs use pieces of buffalo meat as rewards.

A good tip is to write down your dog’s reactions in a notebook. This way, you’ll be more aware of your dog’s progress with the discipline exercises.

Reasons Why a Dog May Become Aggressive
An aggressive dog feels fear when their owners pulls on their leash. Sometimes they become aggressive because they're territorial or sick. Read more »
Link copied!
Interesting Articles
Controling Aggressiveness
It's Possible to Re-educate an Aggressive Dog