It's Possible to Re-educate an Aggressive Dog

An aggressive dog can be re-educated if you can identify the root cause and treat it by trying to understand the animal. 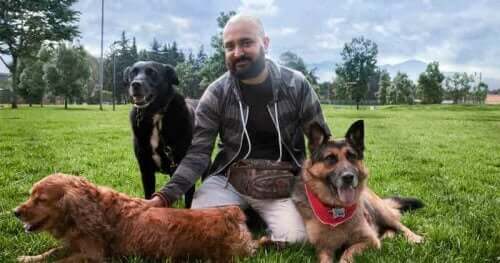 Aggression in dogs is a common problem, particularly in dogs that haven’t been socialized well as puppies or who have suffered some sort of trauma. However, it’s possible to re-educate an aggressive dog if you can identify the root cause and go to the right expert.

Aggression is the tendency to act or respond violently. This behavior can be seen in any animal species when they feel frightened or threatened. A small amount of aggression is natural up to point and is part of an animal’s ability to survive in the wild.

However, when aggression becomes part of a dog’s normal behavior and comes out in relatively normal situations, this is a problem.

Aggression is a form of disruptive behavior. Behavior is disruptive when it doesn’t allow the dog to live normally or causes problems for the people living with it. Other disruptive behaviors include poor social skills, fear, playing inappropriately, or not handling stress well.

An aggressive dog may attack themselves, other animals, strangers, or even the people they live with.

Types of aggression and causes

Aggression can be caused by different things depending on the individual dog. Identifying the type of aggression is a very important step and is the start of retraining an aggressive dog.

Stress is a very important factor in canine aggression. A dog that is very stressed as a result of lifestyle, lack of stimulation, or an inappropriate environment can become aggressive.

How to re-educate an aggressive dog?

As the word suggests, eliminating aggression requires “education”. Educating a dog is important so that they can enjoy all the possible situations they might find in their environment. This means that an aggressive dog needs an educator, not a trainer.

Canine re-education techniques can be dangerous if carried out by someone who isn’t an expert. It’s always best to go to a professional who will use the most appropriate technique for your dog.

There are many different techniques to re-educate an aggressive dog, but all of them should start with observation and communication with the dog. Here are a few examples:

Finally, in order to eliminate bad behavior, it’s important to respond to your dog. For example, if you’re playing and your dog goes to bite, you need to stop playing. You could look for an alternative, such as using a chew toy. Furthermore, it’s important to look to control their impulses, whether they are to bite, eat, or play.

How Spoiling Your Dog Contributes to Aggression
It's taken as a given that, when we choose to take a new furry friend into our lives, we will care for them, love them and enjoy their company Read more »
Link copied!
Interesting Articles
Controling Aggressiveness
Feline Behavior Problems: Different Types of Aggression